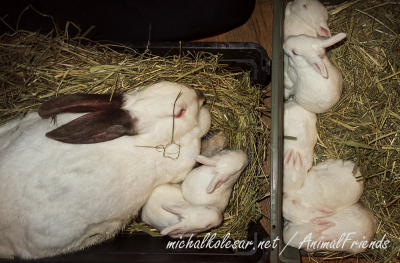 We broke in a factory farm where rabbits are caged in dark place just to breed more and more bunnies until they reach the sufficient weight to be slaughtered. From that cage we took rabbit mom and 10 little white tufts with legs. I asked our rescuing partner, girl who calls herself ‘Bird’ to write a few sentences about things she saw and how she experienced them. (MK)

I was glad for the opportunity to visit this place with Lukas in day time. When we arrived to rescue them impenetrable darkness was all around. This whole place consisted mainly of dense forests and overgrown meadows. After the last rescue actions and my very close encounters with wild boars I felt very uncomfortable in the middle of nowhere.

The watchers went to their places and Michal and Lukas headed to the window through which they planned to get inside. It was not necessary to have more people inside, so only Lukas entered, Michal guarded him and waited by the window with prepared crates for the fastest transportation of animals, just in case of trouble.

As Luke entered the factory farm we heard extremely loud noise. The bumps to the cage bars completely filled the silence for a moment. Terrified rabbit moms that are locked in one cage for their whole life, raped repeatedly, forced to giving birth to more and more bunnies were madly jumping and hitting the walls of their metal prison because of their fear when they saw a man.. From this utterly unimaginable horror, we took the mother and all her cubs.

I transported them to their safe home with Michal. We carried a crate with a huge stressed rabbit mom and another crate with the rest of the bunnies that didn’t fit in the crate with her. The little ones were calm and most of them slept through whole action.

They had a lair prepared in their new home. A few courageous went clumsily to explore a new world for the first time where no cage bars were to stop them. The rest of them just climbed over to their mum and slept on. They were so tiny! About 2 weeks old hairy balls.. The rabbit mom was brave.. she was still very scared, but she wasn’t breathing so hard anymore. I wanted to take her in my arms to make her feel safe. But it was too early. She was barely a few hours out of hell where she was forced to live and serve people. Maybe she was afraid that man would steal her children again as it happened so many times before. We petted her and then let her sleep so she could wake up to the better part of her life. I am so happy she finally has a chance to live in a nice place with her children and that they can grow up by her side.

Marius (Marie) Mason was arrested in 2008 on charges of the Earth Liberation Front and sentenced to jail for nearly 22 years (262 months). He was accused of two sabotages and refused to report other activists, but eventually confessed to 13 actions (12 x E.L.F. and 1 x A.L.F.). At this time, Marius was still Marie.

Against Mary (Marius) testified even her husband Frank Ambrose, who was a paid FBI snitch”