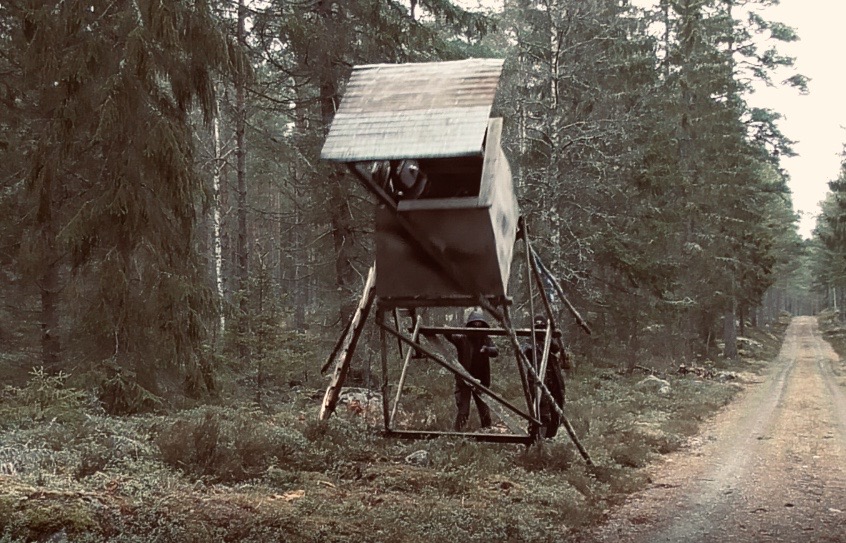 Throughout March and an extension into April, 108 lynxes in eleven immense cull zones across Sweden had a price upon their heads. The usual safety of the snowscape was plagued with traps and trophy-hunting dickheads, desperate to shoot a cat and lay claim to their skin.

As hunt scum loaded their guns, donned their high vis habiliments and popped radio collars on their dog servants, something sinister brewed in the frozen depths of the forests. A gaggle of filthy scuzzy punks conspired in the snow to make the murderers’ lives a daylight nightmare, fight the killing, and wreak havoc upon all the tools of death we laid our badgery little eyes on.

In this masterpiece video documentary 3.0, you can join us in raising your middle fingers to the pricks and prick gear we encountered during the 46 days of licenced lynx hunting in Sweden. We did not limit ourselves to just fucking with lynx killers, but left a trail of destruction, anger and spray paint where any hunters or hunting gear once stood.

We sent a whole bunch of hunters packing, and as well turning our tools towards smashing lynx traps, ensured our stomping boots got plenty of action smashing cages and traps intended for other wildlife comrades.

One of our favourite targets were the shooting towers that litter almost every fucking forest and field we passed. We lost count of exactly how many we ripped the shit out of, but upon careful enumeration and deliberation, we’re sure the final number was about 75. The feeding stations and salt licks used to lure animals towards the guns were also put the fuck out of action.

Then there were the cameras. Hunt scum in Sweden just love leaving us gifts of trail cams by their hunting towers and feeders. It’s especially nice when they leave the memory cards full of pictures of themselves, their vehicles, and their number plates too. Special shout out to Simon, who donated two full years of data, locations of several other towers and feeders, and some lovely pictures of the wildlife he wanted to kill. Fuck you, Simon.

Of course there were cops. It doesn’t matter what bullshit state borders you’re inside, filth and scum go hand-in-hand. Killers always go crying to the cops, who are always all too willing to protect the state-sanctioned murder. What is “law” does not tally with what is right, and we will shout from the tree tops for ever more: ALL COPPERS ARE BASTARDS.

As of yesterday, the extended lynx hunting licences should have expired. We do not yet know the total number of innocent creatures who were needlessly slaughtered for the entertainment of scum. We are immensely grateful to everyone who chucked coins at our PayPal or bought one of bangin tees during this campaign. The vast sizes of the cull zones and the huge distances required to travel meant fuel costs were fucking high, and we would not have been able to maintain our presence in the forests without your support.

And of course, huge thanks to Hunt Saboteurs Sweden, who we formed a solid crew with during this campaign and who are the fucking bomb. Go check em out, they’re doing some good shit and we’re gonna love conspiring with them again in the future.

We are still out in the wild, causing chaos throughout Europe. Hunters cannot hide from us. Preparations for the looming UK badger cull are already in full swing, plus other projects in other countries. If you have some spare cash floating about, it’d be fucking smashing if you could launch it at our PayPal, which is linked in the comments.

Direct action gets the goods, get inspired and get active for wildlife!” 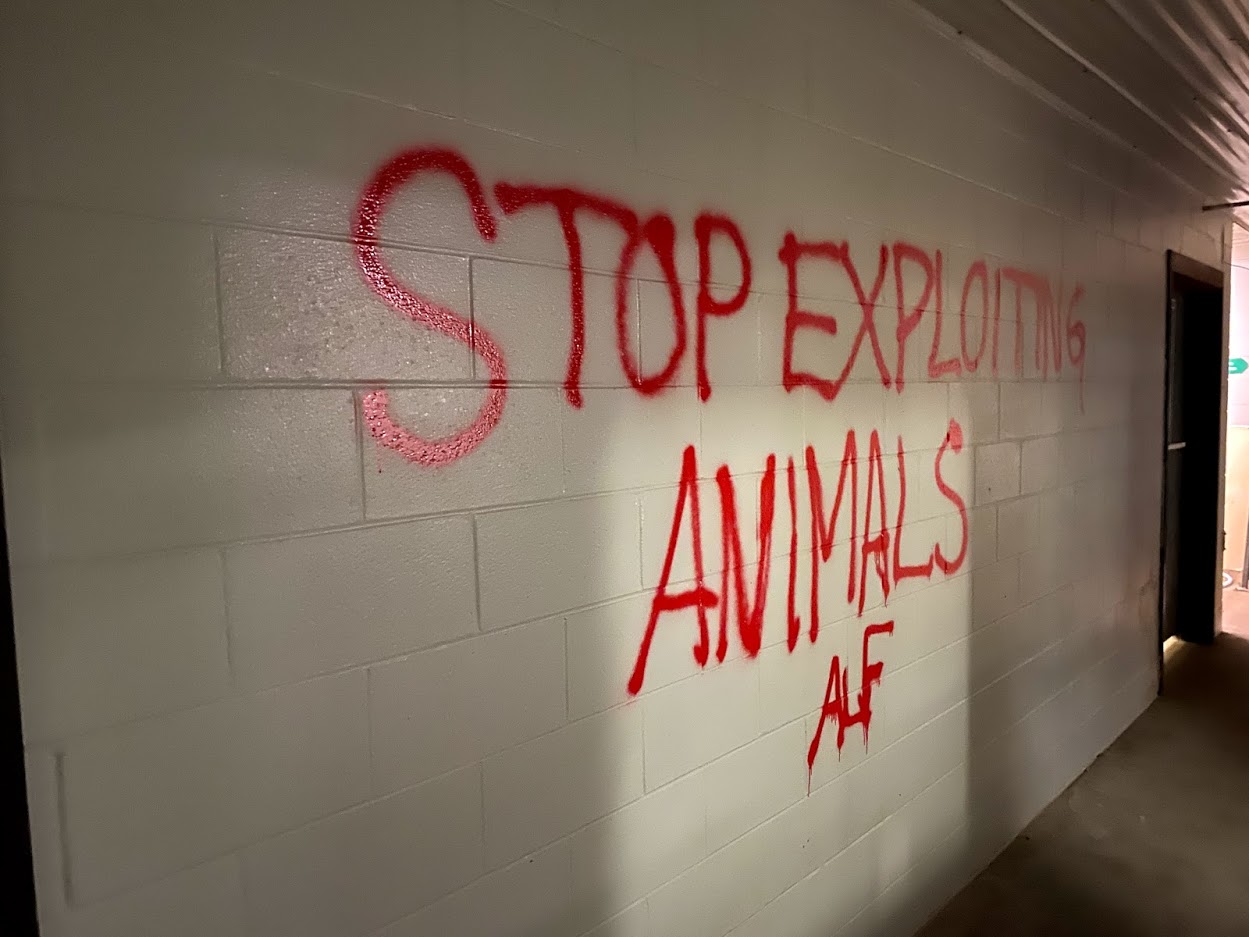 “The University of Guelph is well known as the Hole-y cow university for their experiments with cannulas inserted in cow’s stomachs, but their veterinary, bioscience and agricultural science torture animals in many more ways.

We spray painted their corridor, doors and the cow statue to remind everybody about the cruelty happening behind doors. 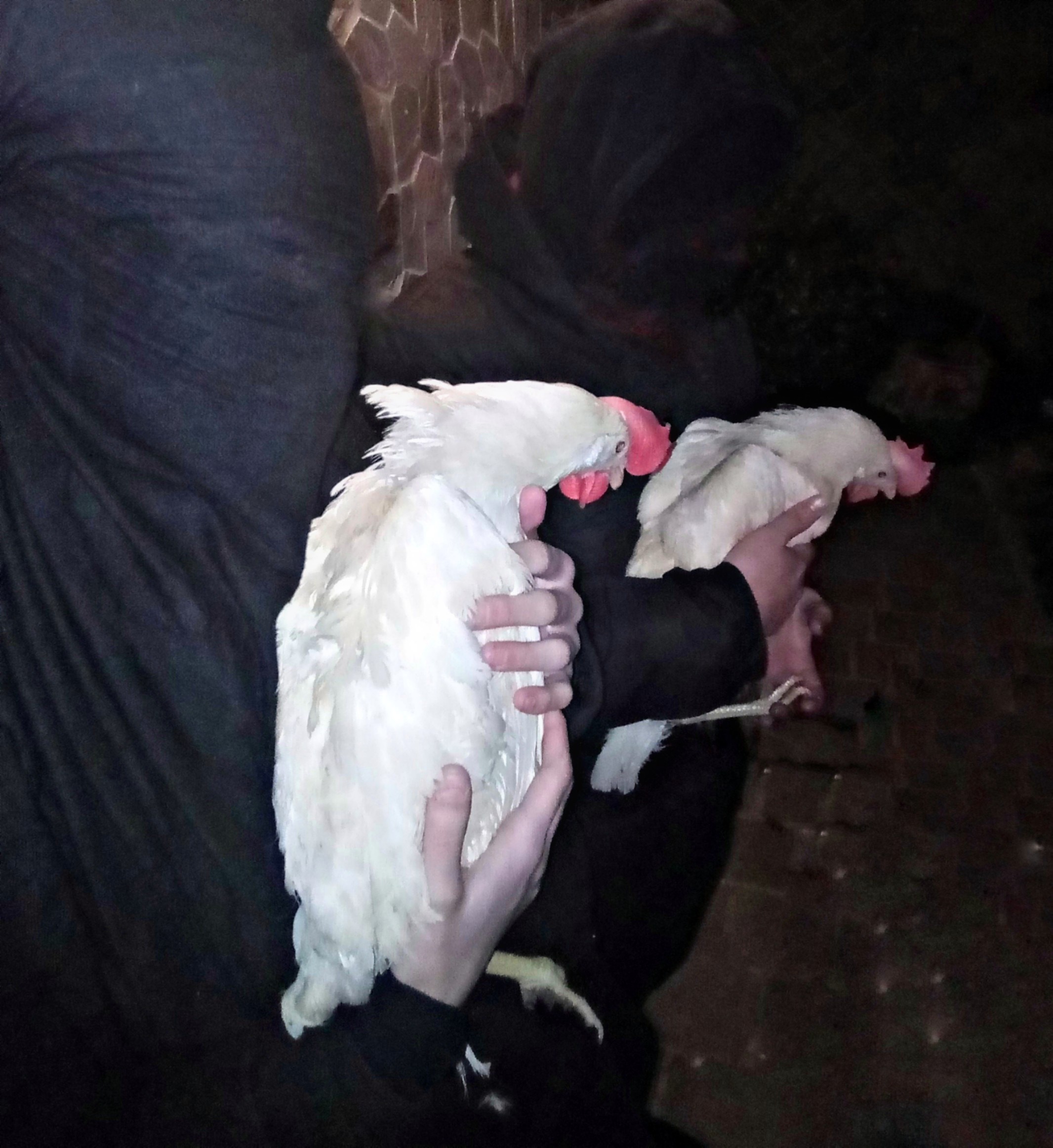 “Imprisoned in cage 1 meter from the ground, the hens were forced to survive standing on plastic grills.

Without light and very little oxygen in a dirty and dusty barn, one of them was found dead.

Free-range is a Lie.” 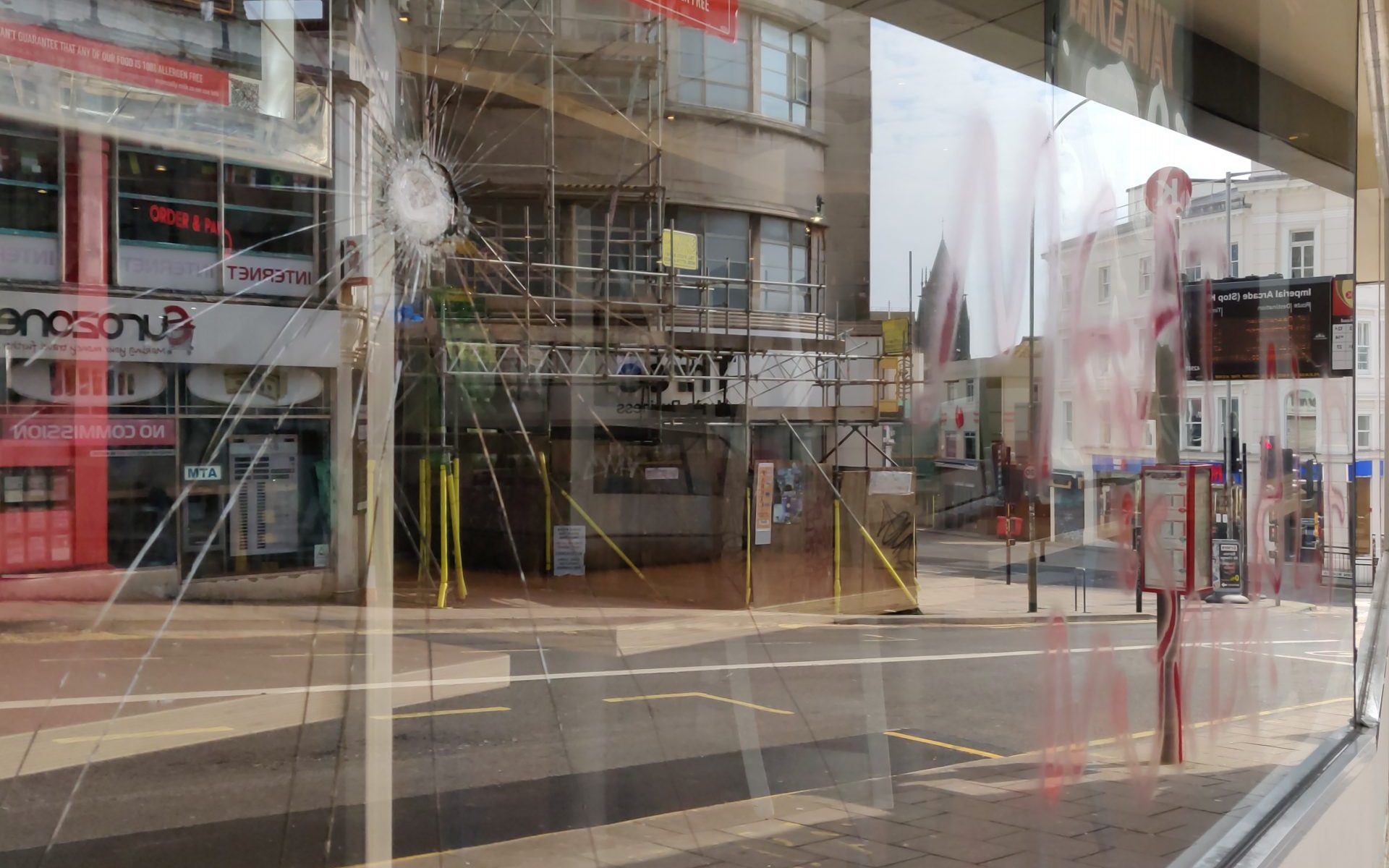 “Recently we took a hammer and a spray can to the streets of Brighton, UK. We are tired of all the cops and speciesist shit out there.

After writing some much needed messages such as “Don’t talk to cops” and “meat is murder” we too out our rage on the Pizza Hut’s windows. This is a call to action: don’t let lockdown hold you from a smashing time. Brin down these animal exploiting business whilst maintaining social distancing, specially from cops!

We dedicate this action to all the prisoners. Until every cage and cell is empty.” 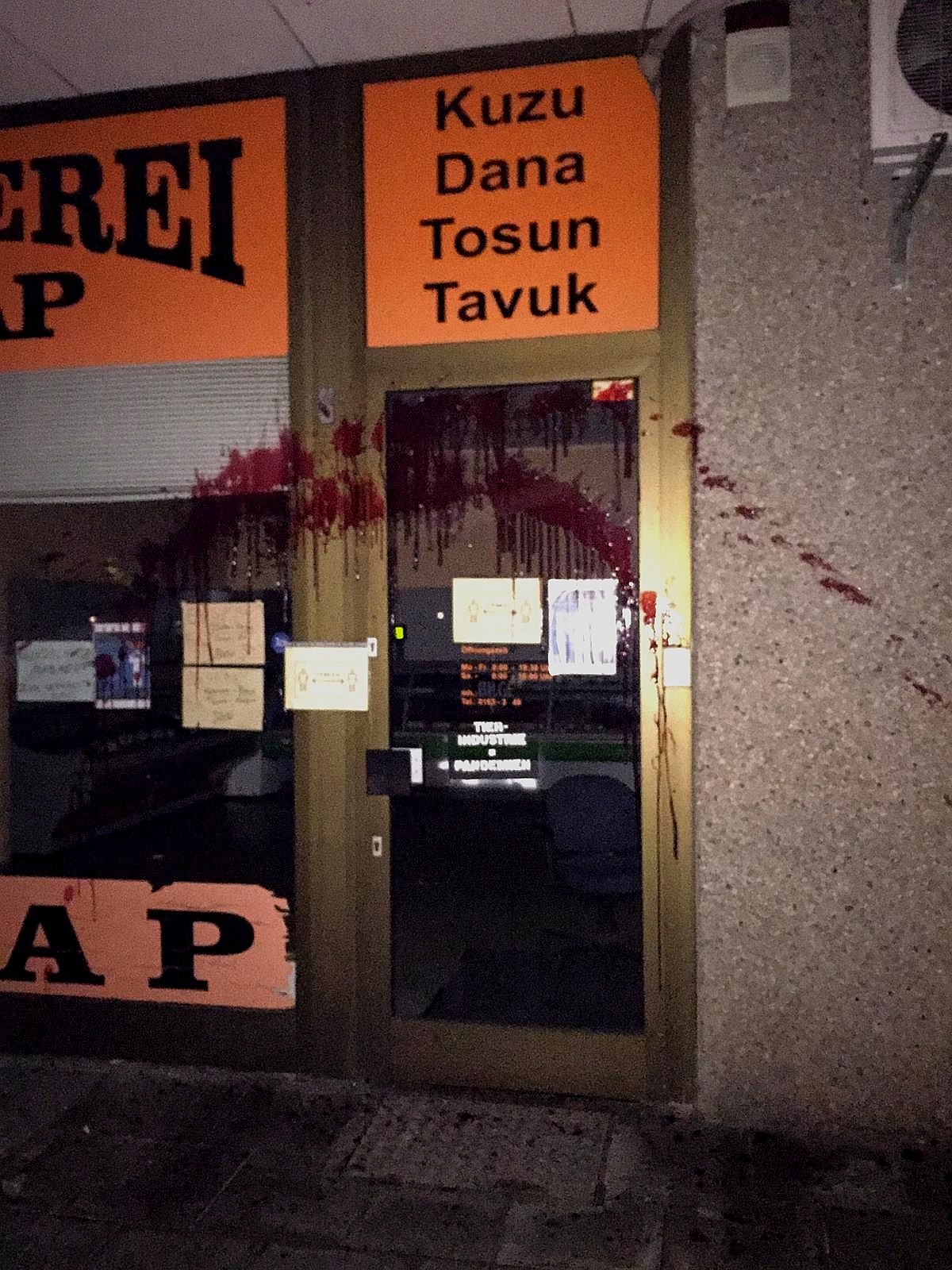 “To show the normalized violence to the people around and to make a statement, that we won?t tolerate this cruel industry.” 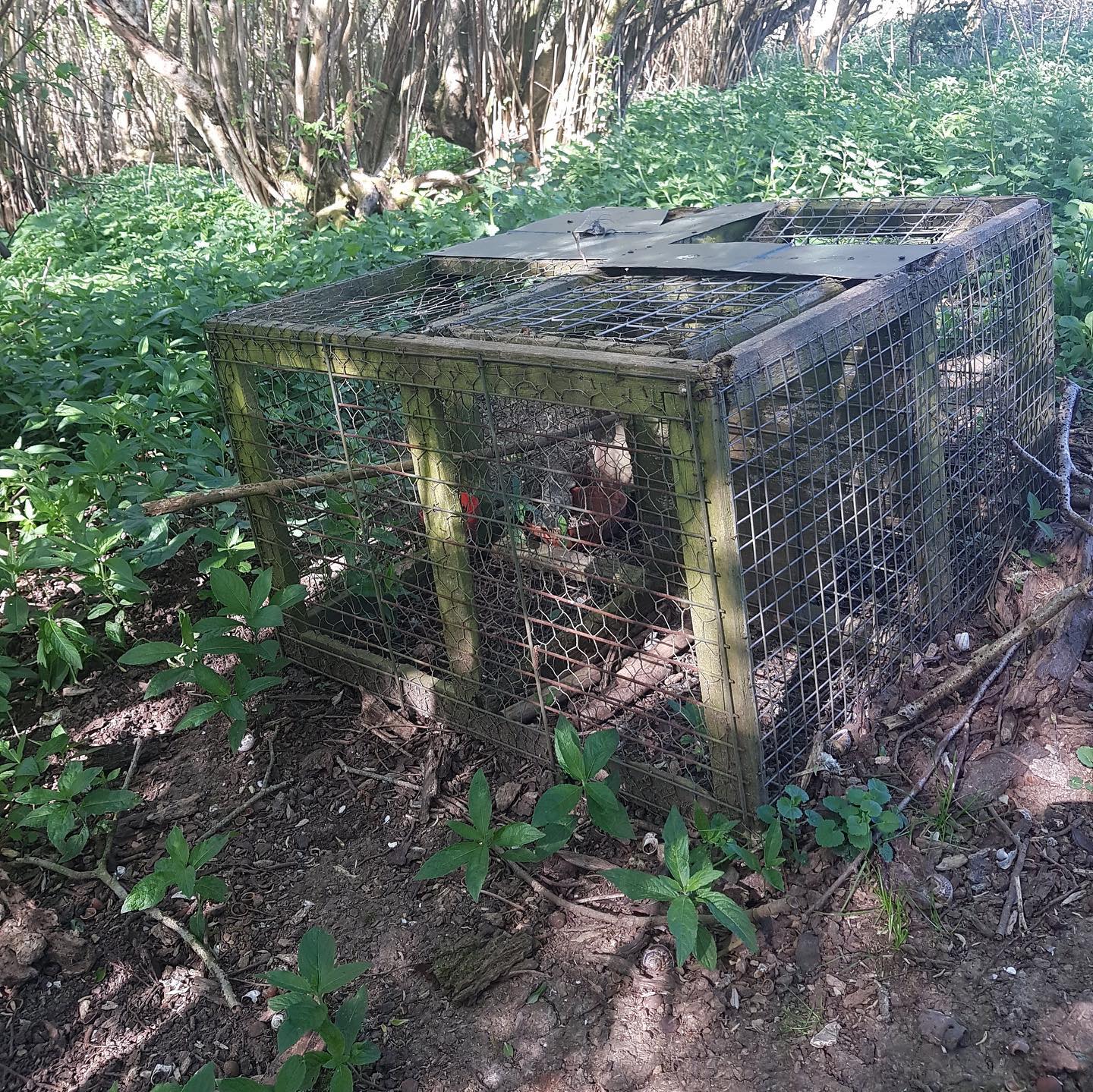 We read the news that some folks were charged with aggravated trespass for sabbing a shoot in Pangdean Farm near Brighton. Because we hate the hunting scum, the cop scum, the judge scum, the justice system scum and basically anyone who puts profit over everything else, we decided that Pangdean Farm deserved a little visit.

Straight to the pheasant pens and in we go with a shooting tower, a Larsen, two Fenn Traps and a fox trap – with a fucking starved to death fox inside. We decided to keep their dignity intact and not photograph them.

After destroying all the traps we could find, we let the pheasant pen fall by breaking the corner posts and kicking the fencing down. Some holes in the mesh will ensure they need to reinstall the whole lot if they want to use it again.

Let this be a warning. We might not know the comrades who were charged, but we stand alongside them because they too fight against the hunt scum. If they go down for doing what’s right, this shoot will have to be visited again, and again, as many times as it is necessary.

Shoots are the vilest of the vile, breeding millions of animals into existence and killing any others that get in their way, purely for profit and greed. Get active to fuck them up.

On the 19th of August in 2018 activists entered a fur farm during a protest in Hjo, Sweden. 5000 mink were freed from their cages. You can see in the video with what ease and speed so many beings were released from their tiny metal cages. Activists also covered the farmers home in stickers. The farmer, Knut Indebetou, not only tortures mink but also raises hundreds of thousands of chickens for slaughter.

In the hit report activists made it clear that  this it was “not the first time he has been targeted and it will not be the last!” They also provided this handy contact info. “If you want to adress you concerns, Contact:
Knut Indebetou
Lilla solberga 1,
54492 HJO
+46708453288″ 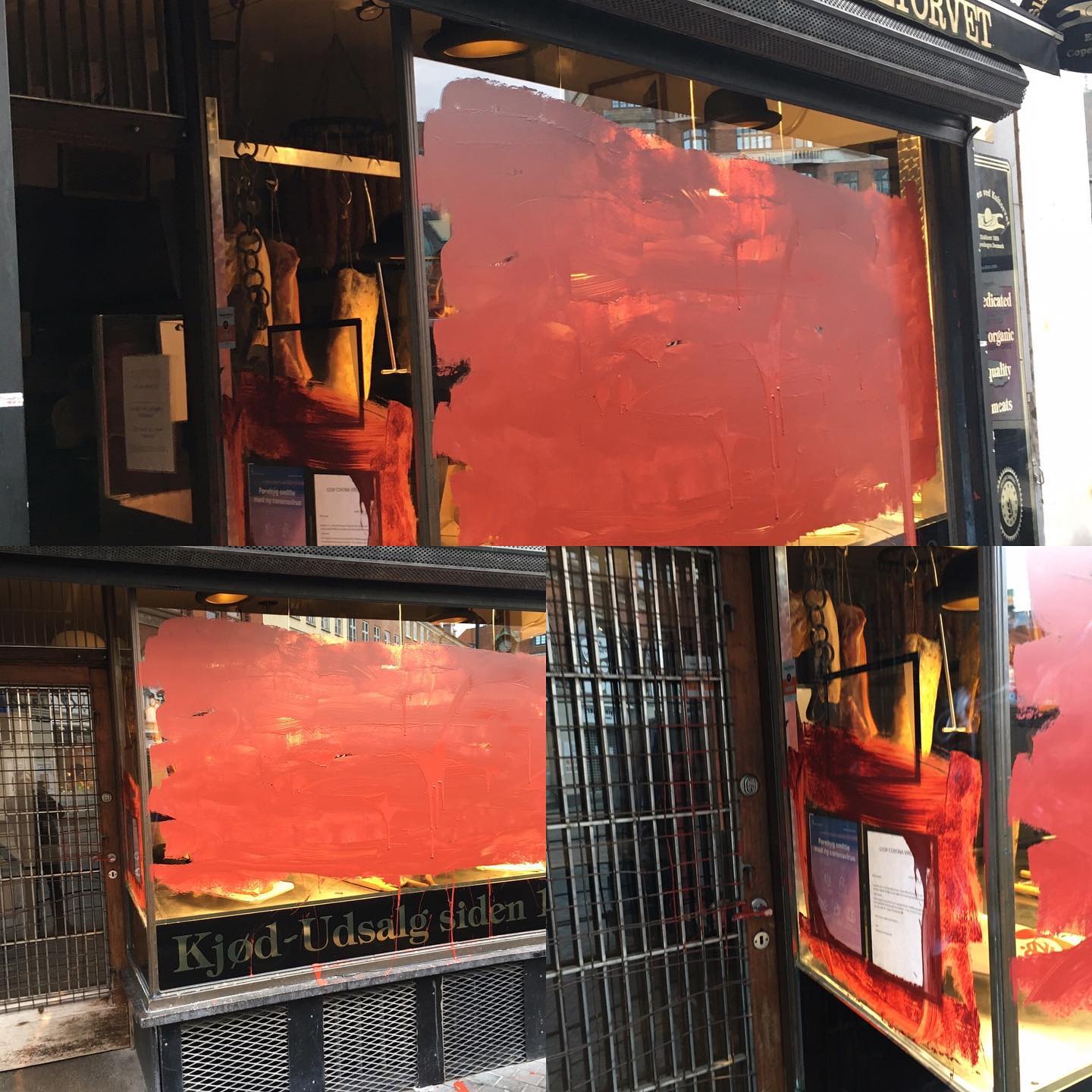 According to Slagteren ved Kultorvet, a butcher shop in Copenhagen, the windows were painted red overnight making their trade “even more difficult” through the pandemic. 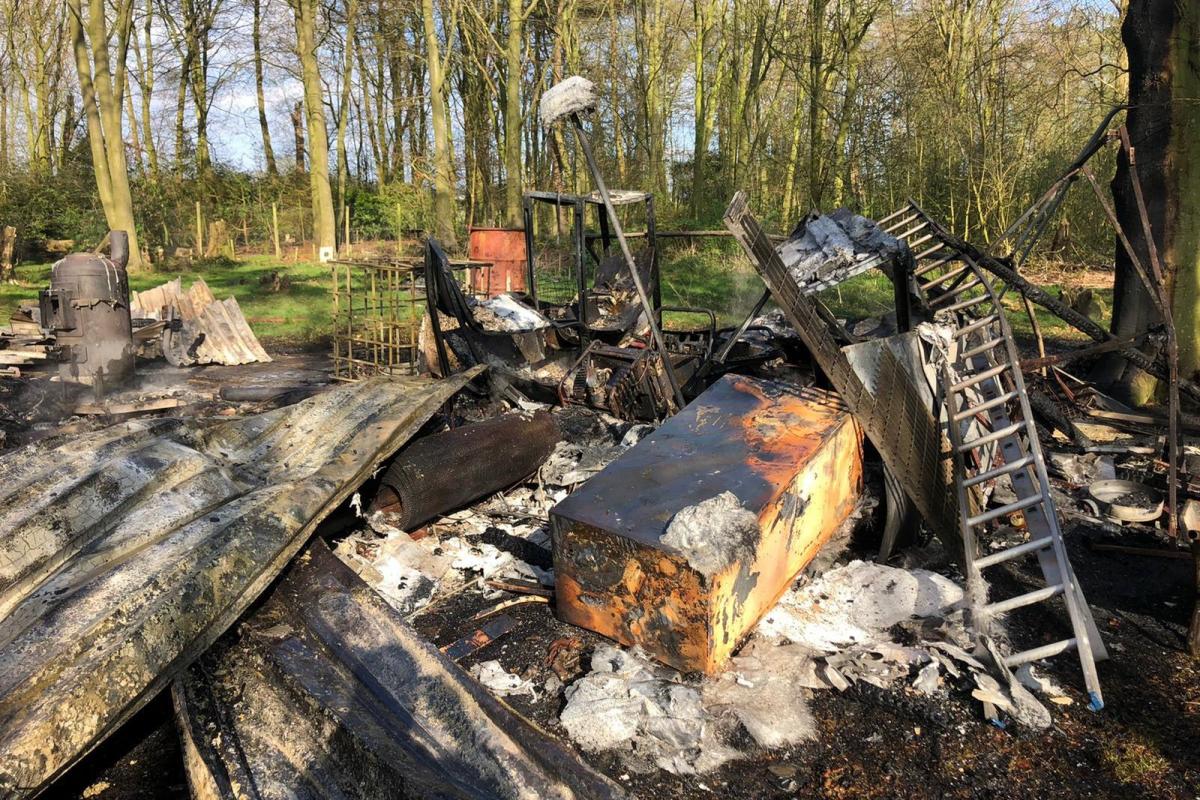 According to media reports, Bellefiled pheasant shoot in Warrington, Cheshire, was set alight. The fire burnt pheasant feeders, power generators, chainsaws and other tools as well as four wooden cabins. The estimated damage accounts for about thirty thousand pounds worth of damage. The filth is investigating it as an arson. 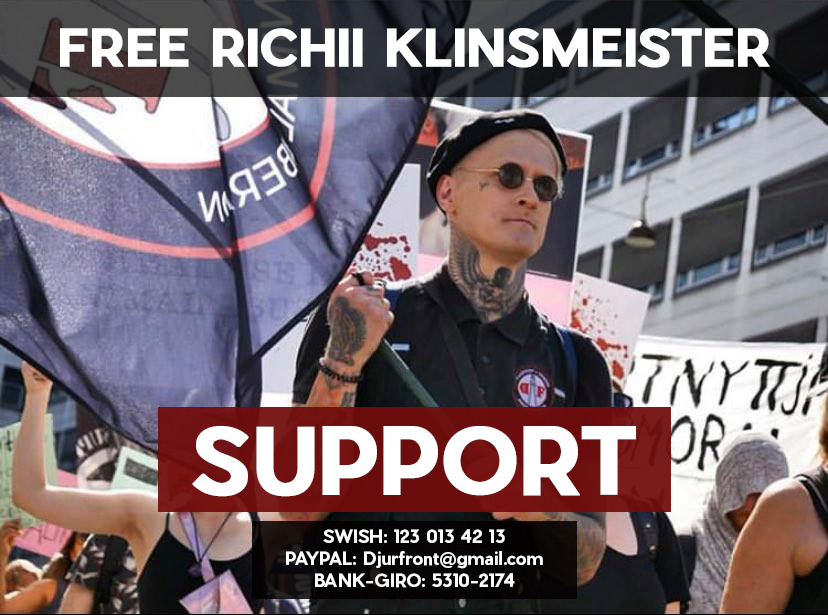 After receiving a six month sentence and a fine wrongly accused of assault at a fur farm demo in Falkenberg, Richii appealed the case. The court of appeal did not allow him to be present during the case, excusing themselves on “safety precautions” when in reality they did not want a mass of people showing solidarity outside and the media picking up on a story they are already pretty interested in. The Court of Appeal made the decision to reduce Richii’s sentence by two months, having to serve four months in prison and pay the 30000 SEK (2750EUR) fine.

We will update Richii’s address once there is one to be able to send letters, but for now you can help by sending money to cover the fine. You can use any of this three methods:

We’ve just sent 5000SEK as that’s as much money we had in the accounts. It would be amazing if other folks could also donate (even if it is just 10EUR!). Let’s ensure that Richii feels supported and let’s ensure that anyone fighting for a better world knows that we have their back. Donate a few coins and send us a PM via Instagram with a screenshot so we can post it on our stories creating a trail of folks showing solidarity and encouraging more people to do the same. Solidarity is our weapon.

We should mention that we are terribly thankful to everybody that has bought merch and joined patreon or sent some money to PayPal. That’s the only reason we are able to send 4-500 quid to someone that needs it straight away. So to all our supporters, thank you very much.

Now go out and encourage others to donate towards the support fund for Richii! Let’s cover that fine in 24 hours!