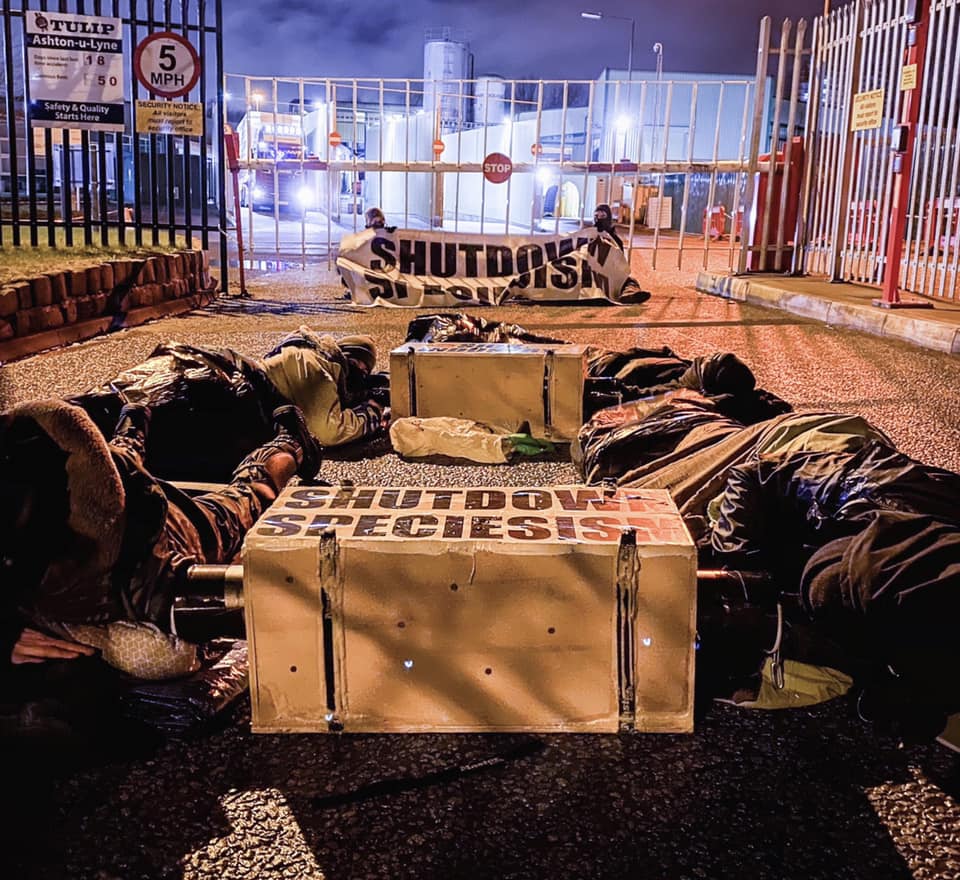 Smash Speciesism is a civil disobedience and direct action group in the UK. Earlier in the year we published about their NOT GUILTY verdict in their case for the Forge Farm Meats slaughterhouse blockade, which stopped the murder for almost the whole day and -as an unexpected win – took the climbing police resources away from evicting protestors who were blockading an arms factory known to sell weapons used to murder Palestinians. During their court case, the judge accepted that the blockade was justified due to the abuse and malpractice by Forge Farm Meats.

During the T&S Campaign, Smash Speciesism blockaded Phil Kerry’s quarry, raising alarm bells about the fact that major trades providers were making dealings with an animal abuser. That action would be the last nail in the coffin after a well thought out campaign by Shut Down T&S and Phil Kerry would announce his imminent retirement from rabbit fur farming. The two activists that blockaded the quarry would have their charges dropped as the cops had once again acted illegally and CPS was unable to build a case.

The group doesn’t shy away from even more disruptive actions. Last year they disrupted the Royal Vet vivisection awards, where alarms attached to helium balloons were set off, people booed and shouted at the speakers and ultimately someone would set off the fire alarm off, forcing the whole university compound to evacuate and the awards event to be cancelled. No activist was arrested as a result of that action.

They also organised another slaughterhouse blockade in 2020 at the gates of Tulip LTD in Manchester. Multiple lock ons and D-locks were deployed and no pigs were killed for the whole day. Last week, a judge acquitted all activists, effectively giving Smash Speciesism yet another win against the speciesist machine.

Whatever is next for Smash Speciesism, we would like to congratulate the activists and celebrate their wins once again. Disruptive, well thought out actions will topple the machine, and they have proven that multiple times.

You can find Smash Speciesism here: