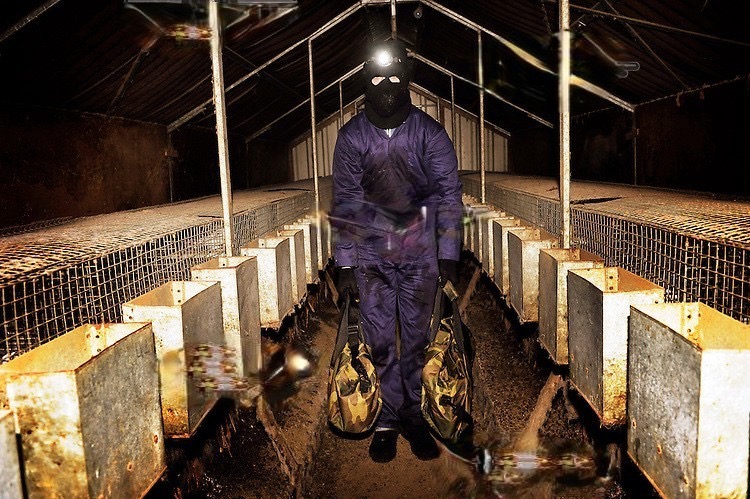 In the past week, the US has woken up to three mink farm raids by the Animal Liberation Front. First in Ohio, where 1000 mink were released into the wild. Michigan was the next target, where 800 mink were reed from cages. Yesterday, at a different farm in Ohio, 40,000 mink found freedom thanks to the ALF, who have yet to claim the action.

Every time that a liberation of this manner is reported, there are many critical voices within the movement that insist in the ecological impact of such actions, or that believe that the animals are far too domesticated to make it in the wild.

We would love to analyse those claims, as well as talk about the thought process behind this type of action, as they are some of the most impactful liberations in the recent years.

Mink liberations (like game bird liberations, or even deer parks) have one very powerful characteristic. Whilst they behave like any other animal liberation action -freeing animals from their place of abuse – they are understood easier as a sabotage action. Unlike other kinds of liberations where the domesticated animals will need care for the rest of their lives, wild animal releases do not require the transport of animals to a secure location, or the rehoming of each individual, or the ongoing treatment and medical care for the rest of their lives. The people involved in wild animal releases do not have to travel out of the raid location with a van full of animals (and the immediate and forensic risk that that entails). Instead, the animals are released into the wild, where they are fully able to meet all their needs and express all their wants. That is a very powerful and much less burdensome action.

We are not talking here about the release of domesticated individuals into the wild. For example, the release of rabbits from a meat farm will without a doubt ensure their death after a few days or weeks, whilst the raid of a rabbit game farm could see thousands of wild rabbits make it into the wild to live for generations to come. In the case of mink, for the most part, fur farms breed American Mink. They are not genetically (or behaviourally) different to their already free comrades. The release of American mink in the North American continent will not force those animals into any more difficulties than any other part of the wild faces with the uber-development of the human species trampling on all sorts of almost disappearing habitats.

There is always an argument about the ecological impact of releasing any kind of animal into the wild, specially on big numbers. The introduction of thousands of individuals does indeed cause an ecological imbalance. But we shouldn’t blame the liberators for that imbalance. The imbalance has been manufactured by greed and capitalism destroying habitat around the world, and by fur farmers that have decided to breed thousands of animals and confine them into a tiny farm. In fact, there has been multiple instances where the farmers themselves have decided to release mink into the wild when the cost of feeding and murdering them was higher than the profits of selling their pelts. Self liberated mink are a common occurrence in mink farms, and arguably if a mink liberation is so impactful that the farm shuts down for good, the ecological impact will be greatly reduced in comparison to decades of that same mink farm working ‘business as usual, releasing mink when they feel like it, with escapees running out of the farm constantly and producing a huge amount of animal waste that leaks into the ecosystem.

There is no action without consequence, and we hope that every single fur farm shuts down, be it because you make them shut down, or because the raids in other farms scare the owners into the realisation that mink (and fox, and chinchilla, and rabbit!) farming is a thing of the past, reserved to history books under the “human horrors and cruelty” chapter.

For more information on mink farm locations (in the USA) and on how people in the past have raided mink farms worldwide, visit https://finalnail.wordpress.com/