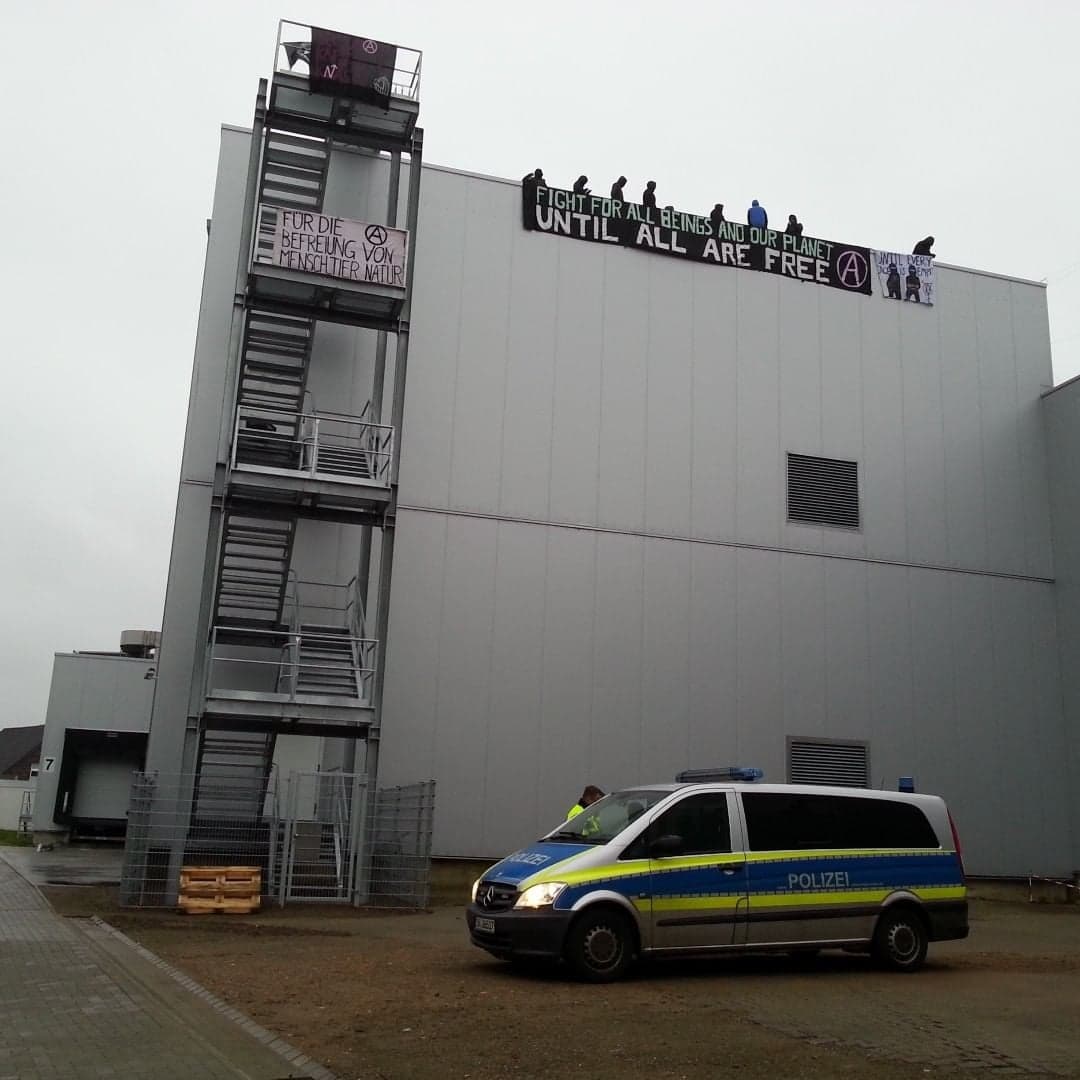 “On 21.10.2019 we, the action group “Tear down Tönnies” blocked the Tönnies slaughterhouse “Thomsen” in Kellinghusen. For almost twelve hours, we prevented the regular slaughter operation and the killing of several thousand animals. The aim of the action was to draw attention to the precarious working conditions, the endless animal suffering and the severe climate and environmental pollution caused by the animal industry. Now Tönnies is demanding a high 5-digit sum of money as compensation for the lost profit and expenses incurred. In the meantime, Tönnies’ demand has been extended to include a claim for injunctive relief.

Tönnies has begun to enforce its claim for damages and injunctive relief in court. Tönnies is represented by the law firm Eversheds Sutherland. With the cease-and-desist declaration, Tönnies

wants us to refrain from entering the slaughterhouse premises, from interfering with access to the ramps or the access road to the slaughterhouse by having people on the roadway and/or from causing or assisting third parties to do so. In the event of a violation, we are to pay 250,000 euros or be sentenced to up to 6 months’ imprisonment.

Tönnies has split up the proceedings and is having the cases heard at the activists’ respective places of residence. This is intended to put us under further pressure, as multiple proceedings significantly increase the cost pressure.

In the meantime, the first hearings have been held before the courts. The first trial was held at the court in Kiel. The activist was ordered to pay 15,626.20 EUR in damages. The court thus recognized Tönnies’ claim in full. However, the injunction demand was judged to go too far and was reduced to prohibiting the activist from entering the slaughterhouse grounds in Kellinghusen. We have appealed against the decision of this court.

The fourth trial was again heard by the Kiel Regional Court. The competent judge considers Tönnies’ claim for damages to be inconclusive and insufficiently substantiated. However, she does not fundamentally question the claim for damages against us. Tönnies has until mid-May to submit further evidence for the claimed costs. The verdict is to be announced on June 03, 2011.

The proceedings in Braunschweig and Kiel were accompanied by solidarity.

20 to 50 supporters came to the rallies in front of the court. Due to the Corona restrictions, only a few people were able to accompany the trial in court. The trials attract a lot of media attention. Thus, they offer us a good opportunity to emphasize our demands for an agricultural turnaround towards solidarity-based and organic agriculture as well as an exit from the animal industry and an end to the exploitation of animals, humans and the environment. We also have to criticize and problematize the attempts of corporations to stop protests with civil suits against activists.

We can only be successful together. Let us ensure that Tönnies loses the desire to sue. Use the trial to take further action against Tönnies.

We are happy about a solidary process support,

Our solidarity against their repression!