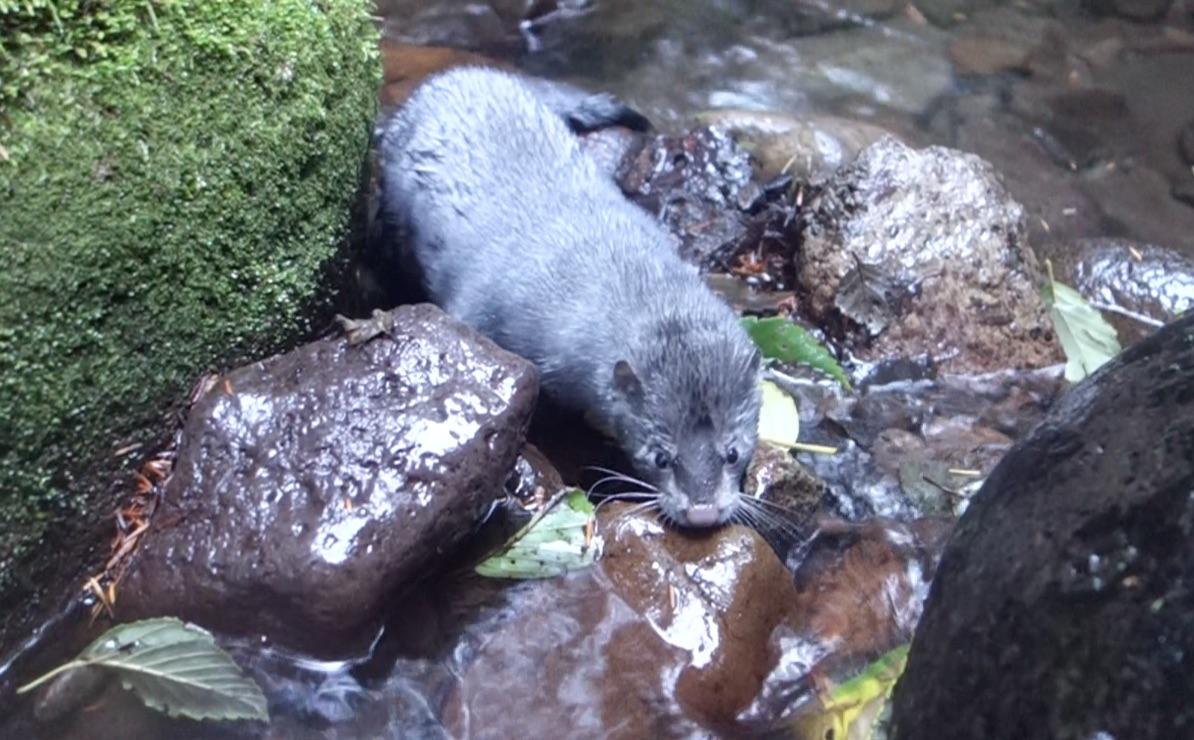 “This is the story of fur farm animal liberation that took place in the Pacific Northwest just over a year ago. In the wake of this year’s winter pelting season, and the mass culling of millions of mink on European farms as a result of Covid-19—a disease no doubt caused by animal exploitation—we figured it was time to share this previously untold story. This communique is in solidarity with all wildlife prisoners, and the private industry exploitation of their would-be wild homes.

In June, a lone animal liberation activist sat behind a large fallen tree outside the perimeter fence of an Oregon fur farm. This was one of several farms visited to determine which Northwestern farms were operational, and which had shut down over the last few years. The hard rain bouncing off the metal roofs of the long narrow sheds drowned out sounds of mink clawing at their wire cages. Using a tree limb that sat above the the fence topped with electric wire, the lone activist pulled themself up and dropped into the fur farm compound and ducked inside the nearest shed. On other farms, they had seen piles of skinned mink and fox carcasses decomposing and mink bouncing neurotically off wire walls in filthy conditions. Nothing could have prepared them for the haunting image that waited inside the first shed. A female mink, curled around her newborn kits. So young they were unable to open their eyes. She had a calm about her previously unseen in other fur farmed mink. Her body still, her eyes intentional and focused. She just wanted her children safe.

In that moment, the lone activist made a promise to return for the imprisoned wildlife at this farm. We were still months away from the time of year where all mink on the farm were mature enough to stand a chance at survival if released. The decision was made to temporarily abandon surveying Northwestern farms and spend the next couple months planning a raid at this facility. The promise to return would mean crossing the threshold into illegal direct action, risking encounters with possibly armed fur farmers and the threat of prison. Still, the promise to return would not be broken.

After recruiting help of another activist, the two visited the farm again to further familiarize themselves with the layout, decide which fences would need to be cut, and check for any security devices or patrols. Apart from the high voltage electric wire and the house that sat at close proximity, there seemed to be no security in place. It is widely known that mass releases of farmed mink have a crippling economic impact on farmers and the industry, even if all or most of the animals are recaptured. It has been written that on average only 30% of released mink actually escape into the surrounding environment. Still heart broken by the eyes of the mother mink and emboldened by the obvious lack of security, they decided to take an extra step with the raid. Not only would they attempt to cut fences and empty as many sheds as possible, they also planned to relocate 8 healthy mink to a carefully chosen site deep in the forest. They were determined to do as much to save individual lives as possible.

The chosen window for the action was approaching fast and topographical maps were studied and potential release sites were researched to be sure no endangered animals would be negatively impacted by releasing the 8 mink. After researching and visiting several potential release sites, a large creek was found that connected to a network of streams and rivers which were visibly abundant with small fish for the newly released predators. The site sat at the edge of a large wilderness area, free from roads, where the mink could explore and begin their new lives free from human presence. The mink’s intolerance of each other, and their ability to roam upwards of 7 miles in a day, would ensure low population density and the wide dispersal into their rightful wilderness home. All that was left was to wait until the animals were full grown and choose the night for action.

On the night of the raid, two camouflage clad liberators jogged down the road that ran behind the farm before picking up the two handmade mink carriers which were stashed behind a tree. The two made their way across a field all the while keeping an eye on the back porch of the house that neighbored the farm, and snipping barbed wire fences along the way to allow for a quick escape. While the thick metal wire of the farm’s perimeter fence was being cut, the whole farm lit up with a bright light. After a few long seconds, they realized it was a passing freight train. The rumble of the train served as a noise cover, and the loud work of cutting  the perimeter fence went on. The liberators wasted no time and went about removing nest boxes from cages. Row by row, hundreds of cages were opened of cages were opened and the mink began scurrying around, exploring and shrieking. Before long the mink begun making too much noise and the activists were forced to stop opening cages and moved on to the next phase. An estimated 750 animals had been released.

While one activist went to retrieve the stashed carriers, several animals could be seen crossing the cut fence towards their new life. The 8 chosen mink—males and females—were loaded into the carriers and the group of 8 mink and 2 humans made their escape moving quickly and quietly. One waited with the animals while the other jogged the road to the vehicle. Some time later, they were sitting in the at the predetermined release site in the predawn darkness. As soon as the forest began to brighten into a new day, and a new life, the mink were carried to down a barely existing trail to the river.

Probably at the same time the raid was being discovered, the mink were released one at a time on the banks of the river. The animals were released over the course of an hour, and each one responded different. Some explored the shore while others climbed up logs. Some ran into the cover of thick ferns. One tested the water carefully with their paw before submerging their whole face and shaking off the water. For the first time they all felt the earth under their feet and water in their fur. More than one mink payed close attention to the small fish swimming, giving the liberators confidence that these freed animals stood a solid chance at survival and a full wild life.

The fight against the fur industry is about much more than exacting revenge on an industry that forces animals to languish in tiny cages before being executed and turned to outdated status symbol garments. It is a fight against domestication as the fur industry has tried with little success to reduce wild species to a product. It is about decolonization as the fur industry—especially in the Pacific Northwest—was integral to colonizing and destroying native peoples and their land base. At the start of the 19th century, indigenous communities in the Rogue Valley sold furs to white settlers before white trappers began their own trapping operations without permission on native land. French fur traders ironically called the Tak-elam people the “Rogue River.” It is also a fight against ecocidal practices, for instance one fur farmer was fined for dumping mink manure in an already threatened salmon run in northern Washington.

It should be noted that the mink industry in Denmark—one of the worlds leading producers of fur pelts—is now disappeared as a result of government mandated culling to stop spread and mutation of Covid-19. Seventeen million animals were gassed and buried due to rapid spreading of the virus on Danish mink farms. Farmed mink are the first known instance of non-human animals contracting the virus from humans. This has also been documented on Utah fur farms, and it is likely the American mink industry is also at a turning point. While we wait to see what happens in the mink industry world wide due to culling and virus spread, activists wanting to empty cages and sheds should weigh the risks of introducing Covid 19 to the wild. If one wild animal is imprisoned, economic sabotage against that industry or place is justified. But simple release should be avoided until we know exactly what we are dealing with. The action described in this story took place before the virus hit human populations.

Not only did the 8 mink find a new beginning on the banks of the river, but so did the activists. Up until this point, and flame of ideas surrounding illegal direct action was doused with the thoughts of repercussions. As that last mink dispersed into the forest, it became clear the fight for earth, animal, and human liberation is worth every risk. Every sacrifice. This internal shift brought forth a self liberation from the fears of repression. We know the risks, still we continue fighting because the war against domestication and wildlife imprisonment is a hot one.”