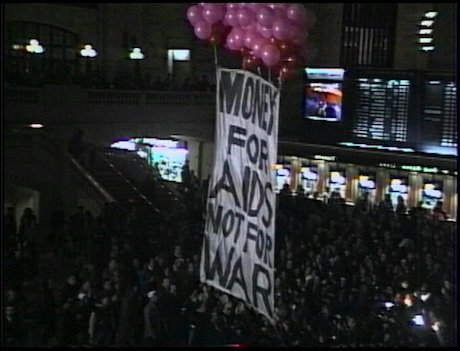 Disclaimer for the feds: Incite, Conspire, Inspire is a solely-for-fun section never designed to give real advice. The tools, tactics and ideas given on the series are only thought to entertain. We would never dream of anyone using any of this tools as a form of dissent and we do not promote, partake in or condone any illegal activities that might derive from said tools.

Helium isn’t just a funny gas that makes you sound silly. It also is a tool for dissent. Today we take a look in the past and get inspired by ACT UP, a collective that worked tirelessly to bring attention to AIDS and HIV+ issues. They flew a giant banner in Grand Central Station (NY) reading “Money for AIDS not for wars” in a protest related to the Gulf War, bringing massive attention to the issue with a few helium balloons, a big fucking banner and a lot of fucking rage.

Tools needed:
– Balloons.
– Helium cannister.
– A BIG banner with your favourite slogan written on it. Ours is “Fuck off” but whatever floats your boat.
– Rope.
– Some plastic bottles filled with water.
– Two wooden rods (or broomsticks or whatever you want) the width of the banner.
– That’s it.

This shit is pretty self explanatory isn’t it? Get that banner painted and dried up (seriously, stop making banners twenty minutes before the demo, they get smudged and you look like you are not a professional anarchist). Attach the rods to the banner with some rope so that the top and bottom of the banner stay straight and don’t fold inwards.

Add a plastic bottle with a little bit of water to the two bottom corners. This will help keep the banner extended all the way down in case the wind moves it around. It might not be necessary if the bottom rod is heavy enough. Test it!

Tie a couple of strings to the bottom of the banner giving yourself two or three metres on each side. This will be helpful during your testing process.

Fill up the balloons and tie them to the top of the banner, testing how many balloons you actually need to lift that big ass flag for freedom. Remember those nice ropes at the bottom of your banner? You can thank me now for not losing your banner to the sky. Take note of the balloons you need and take them off. You can now roll up the banner with the rods included for easy transport. Remove the bottom testing strings unless you want people to easily remove your beautiful banner.

On your trouble making day, fill up fresh balloons. Do a few extras in case some pop or get lost. Tie them in two bunches and leave enough rope to tie them to the banner when you arrive to the location. Once you get to whatever building you want, tie those balloons and release the beast.

Do you want to step it up a notch? Tie some rape alarms to the banner and set them off before releasing the whole system. That will 100% bring attention to what you’ve just done and if done inside of an office building, will annoy everybody immensely. Two for the price of one!

ENVIRONMENTAL DISCLAIMER: Will people please think of the fucking turtles. No seriously, plastic is shit, littering is shit, so littering plastic is .

Do this inside of a building so it cannot fly to the sky. Depending on the building of choice, the business might have to get someone with an air gun to come shoot the balloons down, specially if there are rape alarms attached to it. This is assured havoc.

Do you want to know more about Act Up past and present actions? Check this: https://actupny.org

Video: Short clip from United in Anger, a history of Act UP. A nice documentary talking about Act Up’s history we would recommend all of you to watch:
https://www.youtube.com/watch?v=MrAzU79PBVM

Do you like what we do? Keep us going by joining our Patreon. Even $2 changes things immensely.