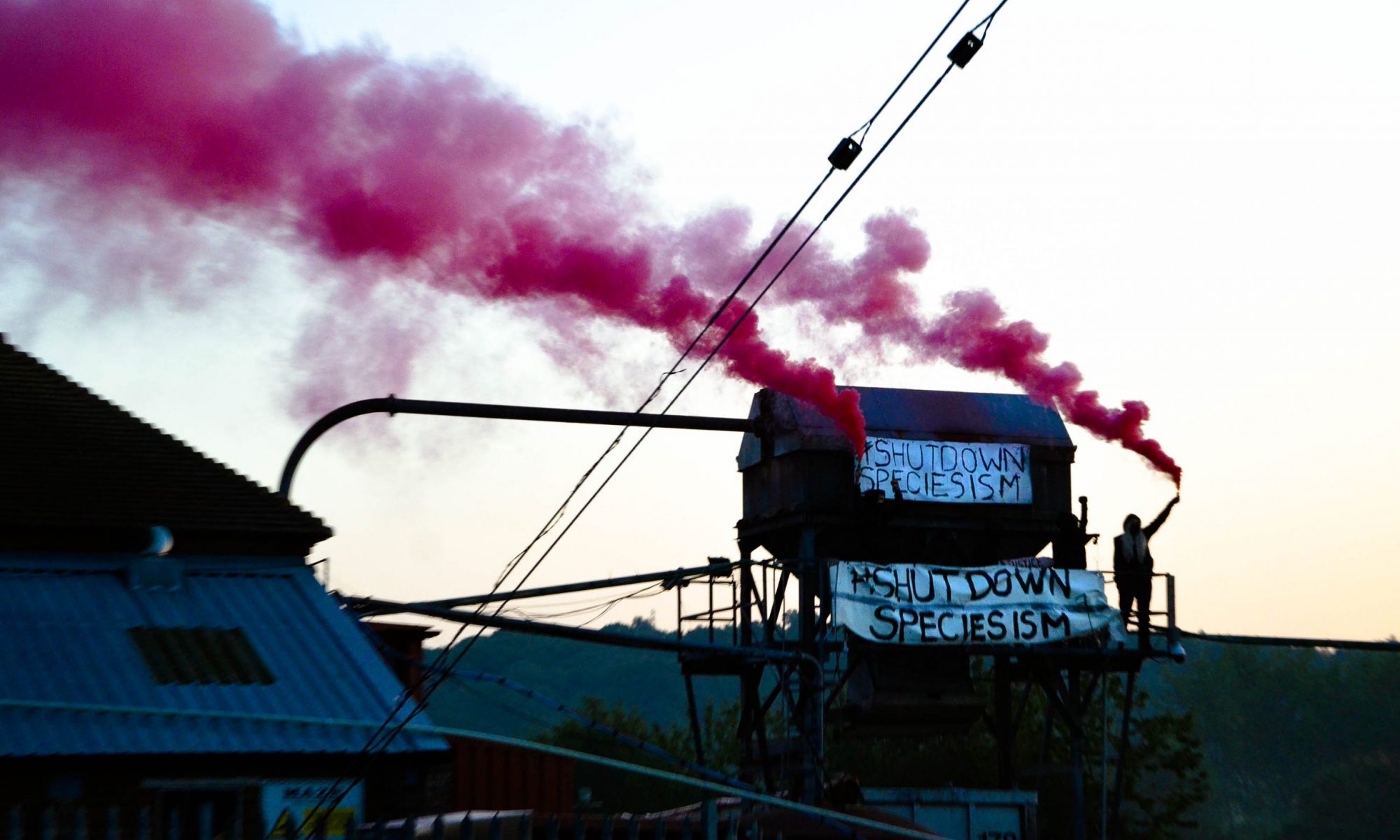 As many people might have seen already, Forge Farm Meat’s was blockaded by ten activists during the early hours of Tuesday, lasting over twelve hours before being evicted and essentially bringing the whole murderous operation to a standstill. Below you can read the report of one of the folks involved in the action.

“We didn’t sleep. More for nerves than lack of preparation, but we didn’t sleep. A couple of hours before setting off, after having met with the team, most of us were pacing up and down without much to do. We shared strategy and agreed on the action boundaries. For the action, we are to remain non-violent and we are not interested in causing any damage to the infrastructure. Not because we are non-violent or because we don’t believe in sabotage, but because we need to create an action approachable and acceptable for those who have never considered direct action.

What happens next is a very quick succession of actions that I struggle to remember perfectly. We drive, we walk down a field wet with dew and we carry lock ons. We take turns carrying that heavy concrete box. A rug is thrown over the barbed wire and we all jump over and into the perimeter. Without opposition and with no workers to be seen, we find Death Row and six people stay whilst another four climb up on the waste silo. We hope they bring a cherry picker to evict the silo.

The police come incredibly quickly. Less than ten minutes into the action and they already are here. They shout, they shove people around and struggle with us. They keep shining torches at us whilst threatening us with a hose. They make sexist comments. I feel disgusted by them, even more than I do regularly. I look at the ACAB lock-on and smile. I’m not sure they get the point as one of them says “Who is Acab”?

By the break of dawn, we can see a good few people already supporting us from outside, whilst eight police officers try to break us down. We don’t care. Today we act because of all the sheep these people murder. They are the subject of our action, they are the only important part. No amount of laughter from the cops, threatening behaviour from workers or words of discouragement from the owner of the slaughterhouse changes anything. Those sheep deserve a second chance, those sheep deserved to be listened to, and we act by extending a metaphorical microphone to them. They want to be free. We are just translating their agency into action that other humans can understand.

The smell fills the air. You can chew it. It surrounds us all in sticky doom. It reminds us of the blood and body parts still rotting in the bins right next to us and of the number of individuals that have been murdered in the building for mere profit under the belief that other animals are lesser than we are.

I look back towards the sheep with my heart in my mouth. They look skinny, terrified, seeking a route to escape. One of them coughs very loudly. The sound hits against my ears, hard, and it worries me. The police don’t take notice. Sheep are things to them.

A drone flies above us. It’s one of our comrades, signalling us, so some of us let off smoke grenades. I cannot wait to see the footage with the sun glowing orange behind us, the disgusting building underneath us and the smoke flying high, tarnishing the sky red. If that image doesn’t make people look, I don’t know what else we can do.

We insist on the fact that we are happy to leave the building and unlock if they release the sheep to a safe home. We have it all prepared, spaces for all of them, transport and regulated drivers. It is their call. They have the chance to redeem themselves, to start a new life, to become part of the solution. We are not naive though, and we know there is a very slim chance.

One by one, they get us out of the lock-ons and into arrest vans. We don’t walk, we go limp and make them carry us. Something turns in my stomach when I look back towards the holding pens and see the sheep. I’m being forced to leave them behind.

At the police station, they act like they are all new. It takes hours for each one of us to be processed and even longer to be interviewed. I think of every animal locked in a crate on their way to slaughter, every animal imprisoned in a box inside of a lab, every single one of them. I think of the sheep I met today and I puke. I will be here for a day maximum. They get life sentence.

After the standard harassment of police and a very long arrest, one by one, all of us are let out with conditions. So many people have been waiting for us outside of the station with snacks and hugs. It is heartwarming and gives me back life. They remind me that the action was a success and explain how the media has reacted to it. They explain that thousands of people have commented or messaged in solidarity and that people keep saying they feel inspired and want to take action.

I think about the last twenty-four hours. It’s been a ride. I only hope that people got the message that speciesism needs to be challenged and more and more comrades decide to stand against it unapologetically. A thought crosses my mind at speed; “what are we blockading next?”. I smile. I’ve only been out for a few minutes. I don’t think I can help myself.”

Do you want Unoffensive doing what we do? Please consider joining our Patreon.