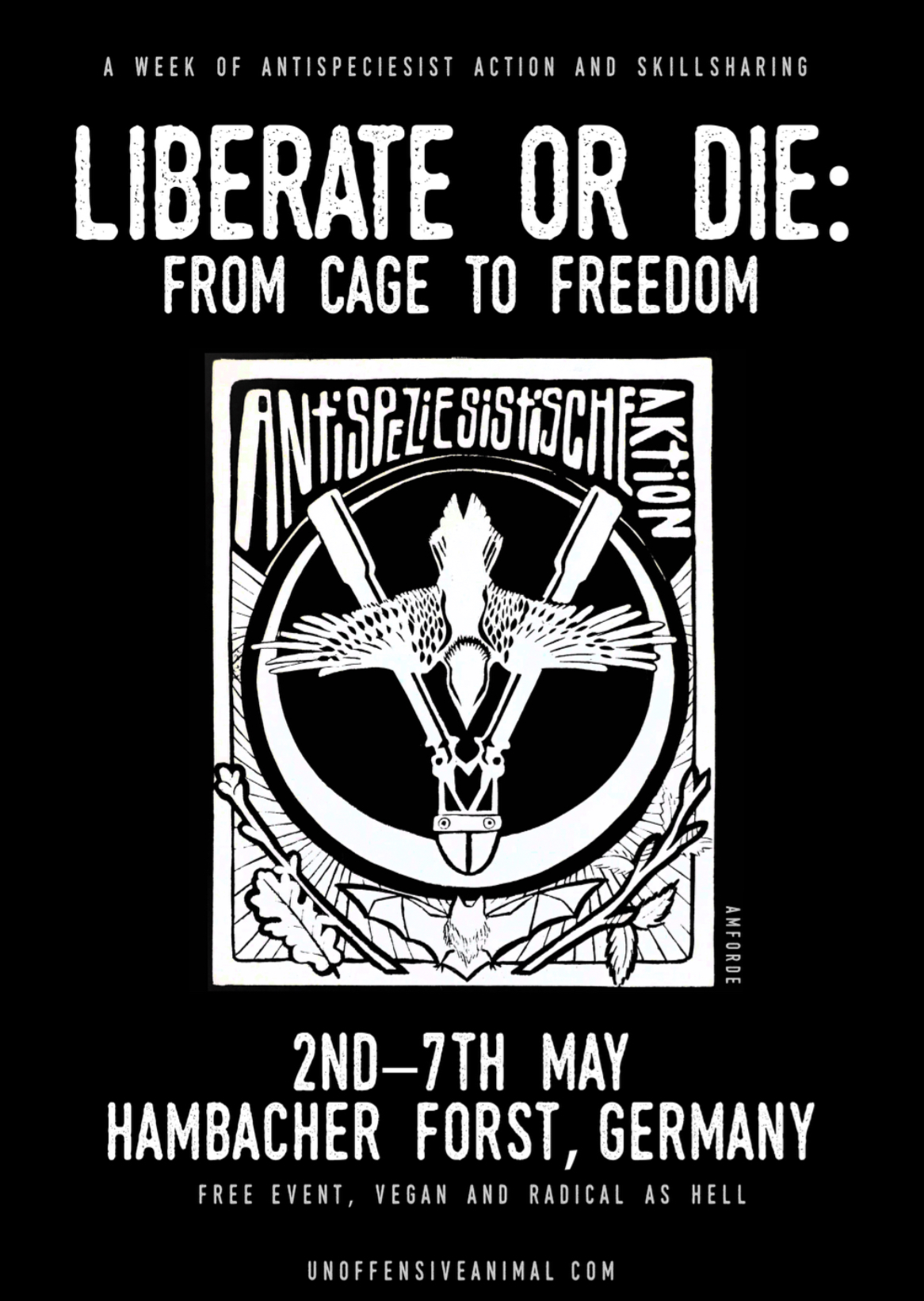 JOIN US FOR A WEEK OF ANTISPECIESIST ACTION, WORKSHOPS AND SKILLSHARING.

After the success of last year’s event we are ready to announce that Liberate or Die: From Cage to Freedom will have a second edition! The event will be hosted in Hambacher Forst, a landmark of anticapitalist and climate justice resistance, to amalgamate the concept of animal liberation to the broader ideal of total liberation.

(This list is provisional and subject to changes. If you’re interested in hosting a workshop, please let us know! The same way, if you’d like to learn something specific or if you believe a specific workshop should be listed, contact us and we will see if we can find someone to host it!)

THIS EVENT IS FREE.

With our concept of Anti-Capitalism, we do not believe people should have to pay to learn, share knowledge and take part in actions. Donations are well received as the occupation can always do with some funds, but they are not necessary! The kitchen collective will have a donation pot and will be very happy to receive some donations during the event, too. They have gotten new equipment this year and it obviously has a lot of costs associated to it all!

THIS EVENT IS VEGAN.

We would like the space to be vegan and the participants should be able to respect it. We dumpster dive most of our food and although the forest has a divide between freegan and vegan diets, the Antispeciesist Space will remain fully vegan.

THIS EVENT IS ACTIVIST RUN.

We are all crew. We all take turns to wash up dishes and to cook dinner, we all collect firewood and build a fire! From each according to their need to each according to their ability, do not be shy to help out! There will be shifts to cover in the kitchen, the welcome point and the washing up station for example. Sign up your name to the sheet and help the event run smooth!

THIS IS AN ACTION EVENT.

From the content of the workshops and discussions to the focus of organising actions throughout the week, this is an action event. We want to see folks standing up and doing more than spreading veganism. We want to see accomplices joining the fight for animal liberation. Actions will be proposed and discussed upon arrival on Thursday and folks will be able to join different actions depending on their level of action and legal risk factor. After last year we have learnt to not announce an action day to avoid police action, so actions will be organised throughout, in and between workshops, and folks can join whatever they see fit.

THIS EVENT IS BASED AT THE HEART OF A COMMUNITY.

We will be sharing the forest with others and many have lived there to protect the trees for
years. Some are VERY camera shy. Taking photos of the occupation is wonderful, but DO NOT take photos of activists without express permission. The same way, phones aren’t very welcomed in plenaries and workshops. Trust us, you’ll feel a massive relieve not carrying it around at all times! Respect for the forest is paramount. Please keep to the paths, leave the wild be wild and pick up your fucking trash. We all are one with the planet. Respect each other.

WHAT SHOULD I BRING?

You should firstly bring yourself. Call in sick at work and avoid going to uni, what’s best; being a wage slave or fighting for the animals?

There is a list of things you could bring with you but if you don’t have
something specifically DO NOT WORRY, we will find a way.

– Sleeping bag and mattress
– Tent (This is actually quite important, if you don’t have one just steal it from Decathlon!)
– Rage
– Head torch
– Love
– Warm clothes
– Boots
– Hugs (but please ask first before sharing them!)
– Harness (if you have one)

We also believe it is important to answer the question; how should I bring that stuff? There are multiple answers, and one of them is NOT in a wheelie carry bag. Don’t bring your wheelie thingy. Seriously. You’re going to a forest.

HOW DO I GET THERE?

If you are coming from outside of Germany, Cologne has great bus connections! Check FlixBus and get yourself here! From Cologne, you will need to grab the train line “S-Bahn” to BUIR. S12 to Duren will work, but google map it if you’re lost!

Once you arrive at Buir’s train station, go down the stairs and turn left. Keep walking over the motorway bridge and another 200m until you arrive at a junction signalling left towards Morschenich. Take the first sand road to the right and carry on walking on the sand path all the way to Jesus Point. There will be a sign telling you how to get to Lluna from there.

If you need more explanation, click on the link below:
https://hambachforest.org/contact/directions/

Closer to the event, paint marks to follow will be posted.

WHEN SHOULD I ARRIVE?

IS IT REALLY FOR FREE?

Yes. Food, smiles and a place to sleep, all for free. Fuck capitalism big time. We are here to change the world, not to become part of the system.

DISCLAIMER 1: This is an ANARCHO-VEGAN event. Nazis, right-wingers, sexists, transphobes and any other form of oppressive bigot needs to abstain themselves from attending. Also cops not welcome but we know you’ll be there, won’t you?

DISCLAIMER 2: Many people in the forest have “forest names”. You can rename yourself too if that makes you happy! We also don’t tend to ask for real names, ages, place of origin and all that stuff. Also, we don’t usually have IDs in the forest as folks like to remain anonymous if they get arrested. Up to you to consider your own security, of course.

DISCLAIMER 3: Last year, cops came to the forest during the event. Some folks got arrested with no legal grounds and UPiii spent time in prison after that day over seriously bullshit charges. We write this because although it is a safe environment, it is also a frontline. In case of police action, you should be responsible of yourself and decide to face the cops or walk away. Both actions being as acceptable as each other. A legal team will be set up for the folks arriving to the event and those who might want to take actions. There also is a very experienced legal team that is available 24/7 for anyone in and around the forest and particularly active during actions and police actions.

DISCLAIMER 4: Humans that live with furry animals are welcome to travel together, but let’s remember that the forest is home to many animals, from resident cats and doggies to wild boar, squirrels and deer. If some furry fellas tend to scare the wild animals, it might be a good idea to not allow them to hunt or to take them on holidays somewhere else. Up to you, but think of everybody. It’s only fair.