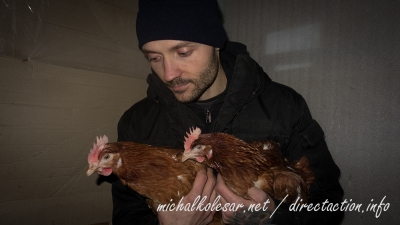 This message contains three rescues at once. In the first one, we took twenthy hens, in the second one five and in the third one eighteen hof them. New rescuer joined us in two of these events. I asked her to write a few sentences. (MK)

My first and second time (Anonym)

It was night, I was standing in the field covered in several layers of clothes realizing what I am doing. Everything slowed down, it was only us walking on the frozen clay. I couldn’t stop thinking about how noisy every step I made was. The sky was full of stars and as I was admiring their beauty, snow was falling in my eyes.

I was on watch at the spot from where Lukas and Michal broke in. Just a while after they entered the areal, our watcher saw the guard and told boys to withdraw. As soon as they both got out, a strong light emerged from nowhere, and I swore it was shining directly upon us. Boys were about to back off and I followed them.

When we returned to our spot, no one knew where the guard was, but Michal and Lukas decided to go in. They looked resolutely as they reached one of the several unbelievably large halls. I lay in the snow and worried for us all. There was nothing but terrifying silence that was occasionally interrupted by the big ventilator that blows air into the halls.

After a while Michal handed me a bag. Until I held it in my hands I didn’t believe it could be full, the scared animals inside didn’t make a sound. Carefully, I put them next to me and hoped they were alive. Michal and Lukas were out of the areal when our watcher told us, there was a suspicious car. Michal told me not to move. In the unnatural poses in which we freezed, we were watching the car that stopped just ahead of us. The hens were still next to me and I was afraid. But for the first time of this evening I forgot about all the possible and impossible reversals, consequences and felt the responsibility for those poor animals whose life depended on our succesful escape.

When we all met in our car I couldn’t guess how others felt. For me, it was hard to process the whole event, the other watchers looked satisfied. It was Lukas and Michal who had looked in the eyes of the suffering victims who they couldn’t save. I am not sure if they could feel any satisfaction, the helplessness must be tearing them apart.

A few kilometers further we stopped the car and I finally saw them! Five big hens.. Michal pulled out the first one and put her in my arms… she stank, her feathers was all dirty. She didn’t have a clue where she was but she didn’t feel the need to defend herself. Maybe she was just too weak. I held her and talked to her and she laid her head on my shoulder. She was so beautiful… I really wanted her to know that.

Seven years ago I first opened my eyes and stopped eating meat. When I opened my eyes the second time I went vegan. Over time I became a fiery activist fighting for animal rights, I thought it was how we save the world. But now as I am finally waking up, it is more about opening my heart and fighting for freedom.

After a week we were back at the same place. Stars that remind people their vanity was gone and the ice became a mud. Leaded by the smell of the factory farm, we wouldn’t miss it even with our eyes closed.

We waited on our spots until the guard makes a regular check out. And we waited a looong time. Michal sat down and wanted me to imagine all the pain that is placed behind these large halls. We sat for a while trying to capture it.

The guard still hasn’t check the areal, but we decided to go in. While Lukas was opening the door of the nearest hall, I was preparing for what I was going to see. I followed Michal in, there was a red light, some tools, no animals and another door infront of us. And then another. I was surprised by the structure and realized, I knew nothing about what’s in there. It was all so strange but I didn’t stop doing deeper.

I don’t remember if it stank inside, if it was cold there or not. But I remember the way all the hens were looking on us. For just a little while, perharps I could swallow a piece of that exposed pain in their eyes. I stood there frightened by the thought that there is nothing I could do to make this stop. The hall was endless and dark and that is all it’s involuntary inhabitants will ever have.

All people did a good job and 18 beautiful creatures was sucessfully rescued that night.