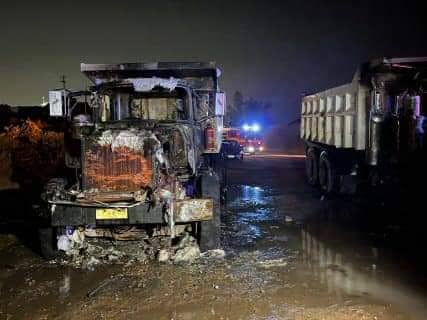 translated from spanish by a comrade and supporter:

On the night of Saturday, October 1, we materialized the attack in defense of the land and waters of the Maipo River through an incendiary sabotage to Empresas Baeza, located on the north bank of the Maipo River in the Puente Alto district, causing considerable damage valued at hundreds million pesos (380 million according to what they say).

Unlike other aggregates companies in the sector that can barely operate a couple of machines, Empresas Baeza generates millionaire profits through the direct devastation of the Maipo riverbank, digging it to extract aggregates and grit, renting machinery for excavation and movement of aggregates and land, contracts with the M.O.P. and highway construction, also counting on multiple tenders granted by municipalities, which largely come from mayors and councilors belonging to the National Renovation party, evidencing links, networks and historical complicity of the Baeza family towards its militants.

An example of their great earnings is the family “mansion” as they usually call their summer home located on Lake Rapel, to which they frequently go to enjoy the charming landscape that the environment offers, contrasting enormously with the surroundings of their company. , where misery and social and ecological degradation are breathed.

The Maipo River is of vital importance for much of the biodiversity in the Metropolitan Region, as well as for the large city founded on it, supplying the population about 70% of drinking water and 90% of irrigation water in addition to the large amount of electricity production generated by the many hydroelectric plants that exploit it (Aes Gener SA, Carbomet Energía SA, Mallarauco SA, Eléctrica Puntilla, Sociedad Canalistas del Maipo (SCM), among others).

However, instead of being deeply valued, respected and cared for, it is outraged and exploited by various companies from different industries in almost all sections of the river, for example:

exploited mainly by Alto Maipo (hydroelectric company belonging to Aes Gener S.A.), from the top of the mountain range to its arrival in the city.

multiple companies dedicated to the extraction and sale of aggregates born during the dictatorship, such as Empresas Baeza and its neighboring cement company of the TX Group, which through its Rosario mining company drills deep into the northern bank of the river. Large vineyards also abound here, mainly belonging to Viña Concha y Toro S.A., hydroelectric power plants such as those mentioned above, where we highlight Carbomet Energía S.A. and its Compañia Auxiliar de Eléctricidad del Maipo S.A. (CAEMSA), both belonging to the company. (CAEMSA), both belonging to Molymet and located in Puente Alto, which use the supposed La Carburera irrigation canal which, far from serving as a source of irrigation for farmers in rural areas, works exclusively for these two hydroelectric plants, in addition to EBAEZA for the operation of some of its aggregate processing machines, for which it is necessary to extract and divert water that significantly impacts the flow present in the Maipo River over a large stretch throughout the year.

Finally, its mouth in Llolleo is also affected by the threat of the expansion of the San Antonio mega-port, a fundamental part of COSIPLAN (ex IIRSA), an ecocidal and mega-extractivist project in the southern cone of Abya Yala. Amazon And as if that were not enough, the powerful and nefarious multinational

Amazon announces its arrival with the installation of its first data-center at South American level in the commune of Puente Alto, which in all probability will exploit the waters of the Maipo to feed its necessary cooling system, as well as the data-centers of Google, Microsoft and Huawei in the northern part of the Metropolitan Region that also need to consume huge amounts of groundwater thus enhancing the drought throughout the territory.

Know that their presence is hostile to Maipo and we will not hesitate to receive them in the worst way, attacking with fire, bullet and gunpowder if necessary!

Today more than ever it is urgent to stop the advance of devastation and prevent the land from continuing to be exploited. Today more than ever it is urgent to destroy everything that perpetuates ecocidal logics. For our part we are very clear that the denunciation and legislation in this regard are counter-times that entrap and minimize the struggle for land, that the cries, banners and slogans do not scratch or scare. That the verbiage and virtual activism remains just that. This is why we propagate here and now the offensive, direct action, without mediators, materializing the fire to the devastation with our own hands and we strongly encourage revolutionaries, insurrectionist, nihilists, rebels of all Abya Yala to take fire and gunpowder in their hands too and destroy companies, houses, offices, transports and lives of all those who destroy ours along with the land, forests, jungles, rivers and fauna. Because it is urgent to end this system of death on all fronts and the liberation of Abya Yala from plunder, colonization, imperialist depredation, extractivist and capitalist logics must happen now. For a free, autonomous and horizontal life between all species and the earth.

To reforest the native, with direct and combative attack!

Regarding the similarities that our action and objective may have with those happened in the Wallmapu and the predictable distortion and manipulation of the ill-intentioned bourgeois press always servile to power. Regarding the discourse that “everything is a set-up” that is constantly raised by some sectors of the citizenry and even many pseudo-revolutionary sectors, we clarify that:

Mónica Caballero, Francisco Solar, Mawünhko, Tomás, Joaquín Garcia, Juan Aliste, Marcelo Villaroel, Mayo, subversive and Mapuche prisoners and clandestinxs, anti-authoritarian and subversive prisoners from all of Abya Yala and the rest of the continents: each one of these fires seeks to give you moments of escape and bring you here because that is how we continue to find ourselves in each attack. With Emilia Bau strongly present in the memory of the Maipo Valley and the liberation of the land.

Weeks away from the third anniversary of that October 18, we do not forget Cristián Valdebenito or all the dead of the revolt. Revenge and the constant attack on power will be where we will permanently meet all our dead.

Death to TPP-11 and all treaties at the service of capital’s devastation and looting of the land and our autonomy.

For anarchy, for the land, for our lives.

Insurrectionary Cell for the Maipo.”