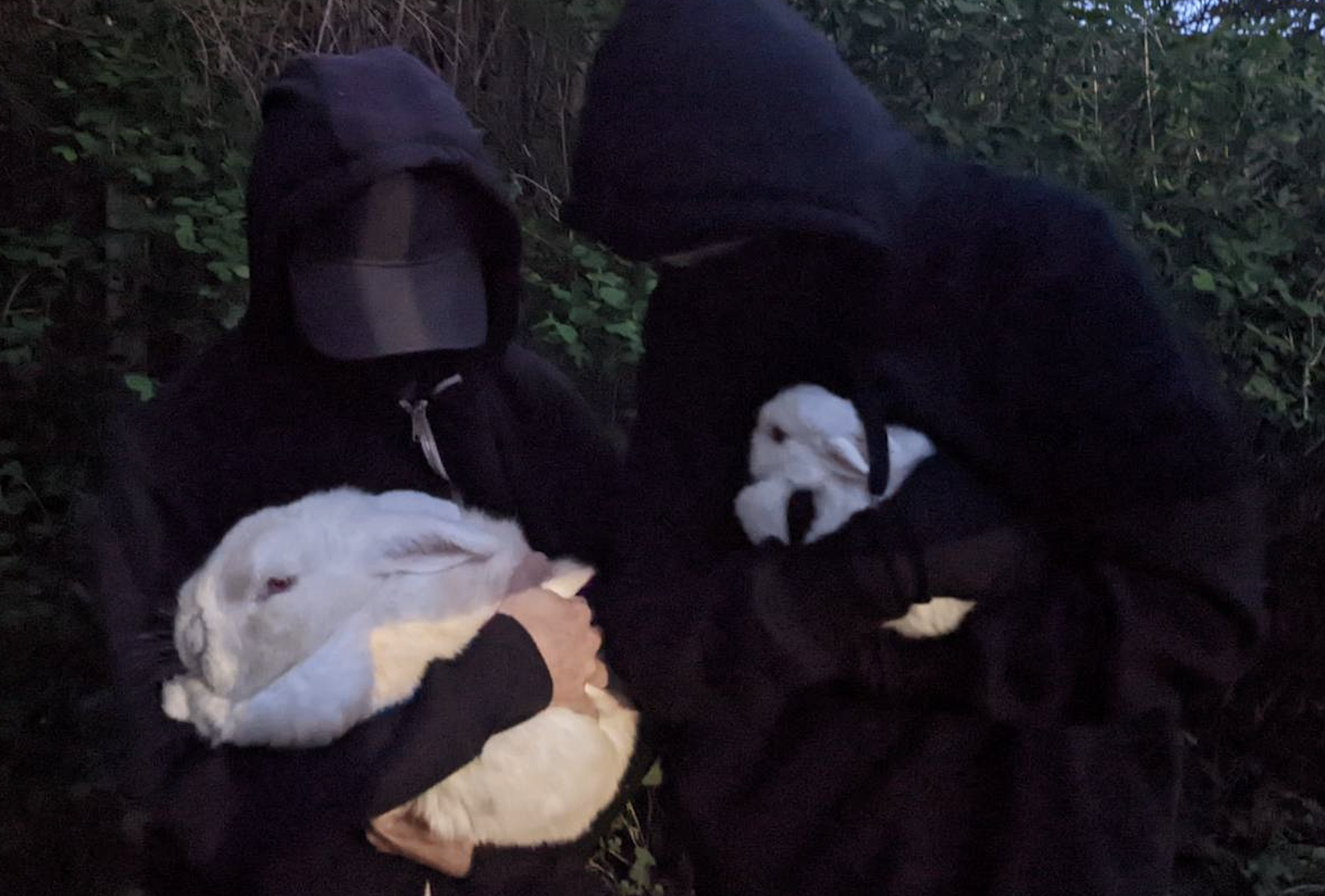 “OVER THE HEDGE WHEN YOU LEAST EXPECT IT!

When we heard that the Rutland rabbits at the T&S Farm had been found we decided to join the surprise demo. The idea was simple, come dressed in black with animal carriers, on Easter Sunday, and stage a demo in front of the many families walking around the nature reserve. When we arrived it was to the beautiful sight of a fully masked black bloc. While it was clear that people were there for a peaceful demo there was an atmosphere of wanting more.

A few jumped over the fence and soon it was a tidal wave of people suddenly willing to do more than stand on the sidelines. We wanted to see those rabbits, we wanted to show others the abuse they were enduring, the mistreatment that Phil inflicts on them. Even with the sound of sirens getting closer there was no turning back, we would not abandon the rabbits. We b-lined through the site and past the static homes and straight to the tiny hutches were the rabbits waited.

When we arrived there, everything changed. Those rabbits were living in tiny hutches, skin and bones, infested with mites, some clearly ill. We couldn’t just bare witness abandoning them behind. How could we leave them awaiting their certain death? We wanted those rabbits to be safe and not murdered and skinned as Phil Kerry had planned for them.

Into the carriers and we were running. The cops had arrived but with our precious cargo we all had to try. Our hearts broke as we saw some people getting grabbed by the filth, some who had not even stepped foot on site, but we kept going, we had to give these rabbits a chance.

Adrenaline was high and the carriers were heavy but we made it and saw others did too.

Thirty rabbits that day made it out, they will live long and happy lives in good homes. There was such power in what happened this Easter Sunday, there was messiness and arrests and mistakes but there was such boldness. There was a job to do and people got it done. The beauty of a crowd autonomously taking action, the strength of it.

We don’t know who else was there but we hope you know we love you. And to those of you who left in the back of a police van we hope you know that many rabbits made it out who wouldn’t have without you.

The glory days of animal liberation are not behind us, they are in front of us, they are now if we make it happen.

Love, rage, solidarity and freedom to the T&S Rabbits!

PS: This text does not represent every person who took part in the mass action, and only explains the feelings and emotions of a group of people who took part.”