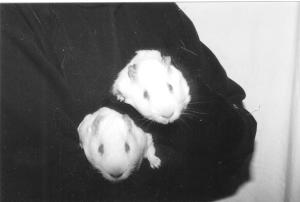 Like the current campaign to Free the MBR Beagles, Britain’s animal liberation movement has seen a few other campaigns to shut down places that were breeding animals for vivisection. In future ALFridays we will have a look at farms targeted for breeding monkeys or rabbits, but we thought Newchurch Guineapig Farm was an interesting case study for folks to learn about.

In 1999, the ALF liberated around six hundred guinea pigs from a farm in Newchurch, Staffordshire, and released a video investigation of the condition inside the sheds. The video would spark a campaign lasting six years with the only aim to Save the Newchurch Guinea Pigs.

Very loud demonstrations were common in Darley Oaks, with folks attending from all around the country to keep pressure on the farm owner. Those demos would not always consist of folks with banners and drums, and in many occasions people would attempt to breach through and break into the farms, even granting police helicopters to stop them.

Slow and steady, many secondary targets gave up their involvement with Mr Hall, who would have to give up any income he was producing by breeding turkeys for the meat industry, dairy and even his crops. Interestingly he probably would’ve been left alone if he had given up the guinea pig enterprise and carried on exploiting animals in other ways, but his firm conviction to keep producing animals for vivisection would ultimately translate in the total collapse of his business.

During a period of two years, the police logged in more than 450 separate ‘criminal’ acts related to the campaign. From telephone and electricity poles cut around the farm to paint stripper and graffiti over worker’s cars, anonymous people made clear their frustration about the breeding of guinea pigs for vivisection. Twelve workers ended up quitting because of the targeted campaign, with many others installing security systems, CCTV and even metal shutters in their private homes.

In October 2004, the remains of Christopher Hall’s mother-in-law were dug up and removed. Many groups organising for the campaign publicly spoke up against the action.

By August 2005, Mr Hall announced that due to that last action he was going to shut down the farm for good.

Whilst not everybody would agree with all the factions of the campaign (underground or overground), there is no doubt that Save the Newchurch Guinea Pigs, piggybacking of other campaigns like Shamrock, Consort and Hillgrove did a fantastic job at stopping that vile family from breeding for vivisection.