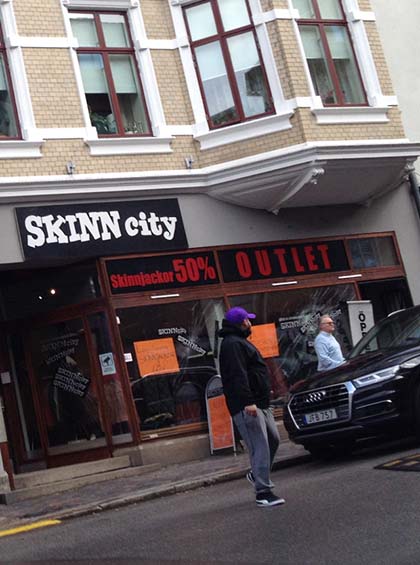 “On the night of the October 11th the leather shop Skinn city (that also sells fur and down) got attacked again by the A.L.F.

They had not yet bought a new window to their door since the last time we gave them a friendly visit. This time we striked harder! We smashed the fuck out of their two big windows.

The following day they put up signs saying that they’re having a total clearance sale. They even wrote an explanation why they’re doing this: ‘We have been attacked because we sell leather jackets’. They got that right! Inflicting economic damage to animal abusers is the least we can do! We and the animals are very happy that this shop is going to be put to an end. (The guy with the blue shirt is the bastard who owns the shop).

We did this in love and solidarity with all the animals who’ve been murdered in that shop and for our dear comrade Richii Klinsmeister who’s been sentenced for 6 months in prison.