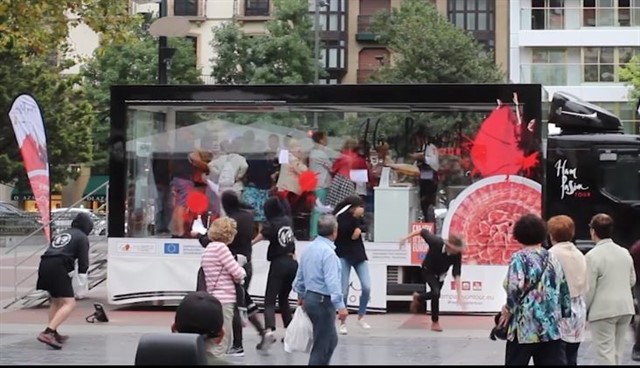 “Last saturday we saw that a truck had arrived to our city, it was giving
away pieces of pig legs (ham) for people to eat for free, there was “Ham
Passion Tour” written all over it, so we decided to investigate online.

It turns out that this Tour is funded by the European Union, and its
objective is to promote the so called “mediterranean diet” by taking
this truck to several cities of the continent and the UK.

We saw this truck as a clear symbol of speciesism and exploitation, so we decided to throw some balloons filled with red paint at it, we also threw some leaflets explaining the reasons behind the action.

We know there are a lot of nice people that probably want to welcome the truck when it arrives to their area, so take a look at the map and dates of the tour, don’t miss a chance to greet it!