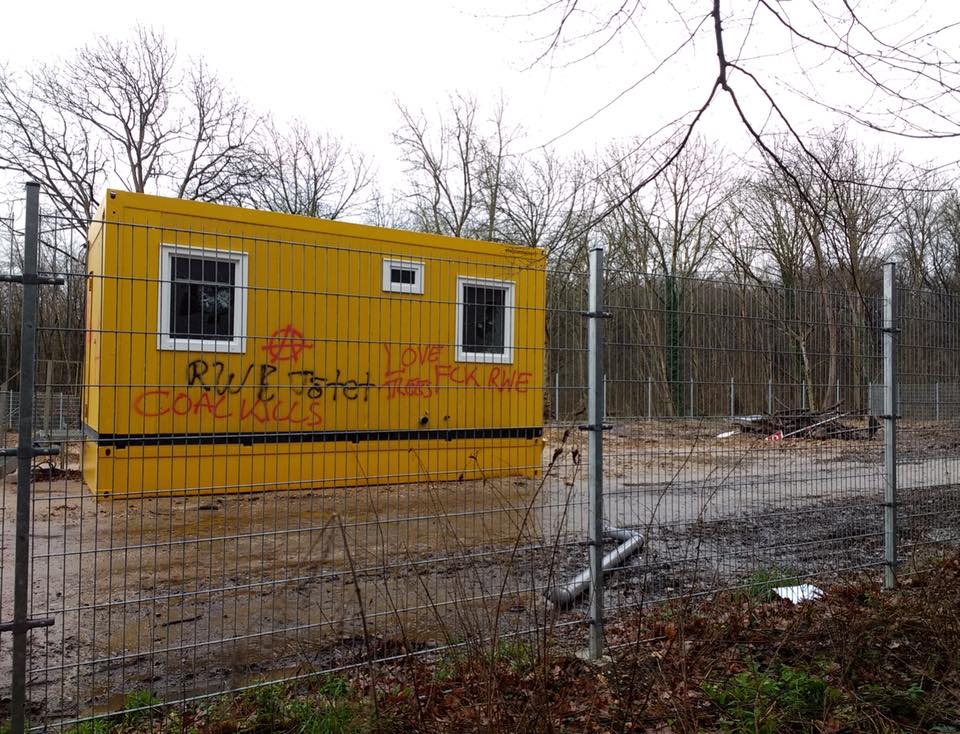 We are a group of autonomous anarchists. We are nature defending itself, acting to protect the Hambacher Forest and the world from RWE and capitalism.
In this action, an area of RWE was destroyed. The area was previously part of the forest. RWE cut all the trees, destroyed the habitat of the living beings, built new structures, fenced it off, and observed it with cameras. These structures would help them to destroy the rest (226 hectares) of the 12,000 year old forest (originally 5500 hectares) for their profit with lignite/browncoal, which produces 90 million tons of CO2 per year.

This are was opened by us again and given back to the forest. The material they used to kill the forest is now being used to protect the forest. The structures inside are no longer available to RWE, so they cannot use them to destroy the forest further. We left messages to RWE, expressing our feelings towards them.

As RWE cut trees in the Hambacher Forest outside of the winter cutting season, it shows that they do not care about the law any more than we do. We do not want them to claim this area of mutilated forest for themselves, and will make it as difficult as possible for RWE to build new structures here and anywhere else in the Hambi.

RWE bribe local community organisations, and put pressure on local resistance groups. Police claimed that more militant action would result in greater repression, and would cause them to evict and cut the forest, making it the fault of activists that trees are cut. This action is to show that the resistance will not stop just because they are trying to scare us.

This is just the start of the fight back for 2018. The resistance will be really intense now, and will escalate to be even worse if there are any evictions. It was said before the cutting season that no tree will be cut for free – the more they cut the more expensive it will be. The same for evictions. Therefore it would be better for RWE if they shut the mine now and leave the forest.