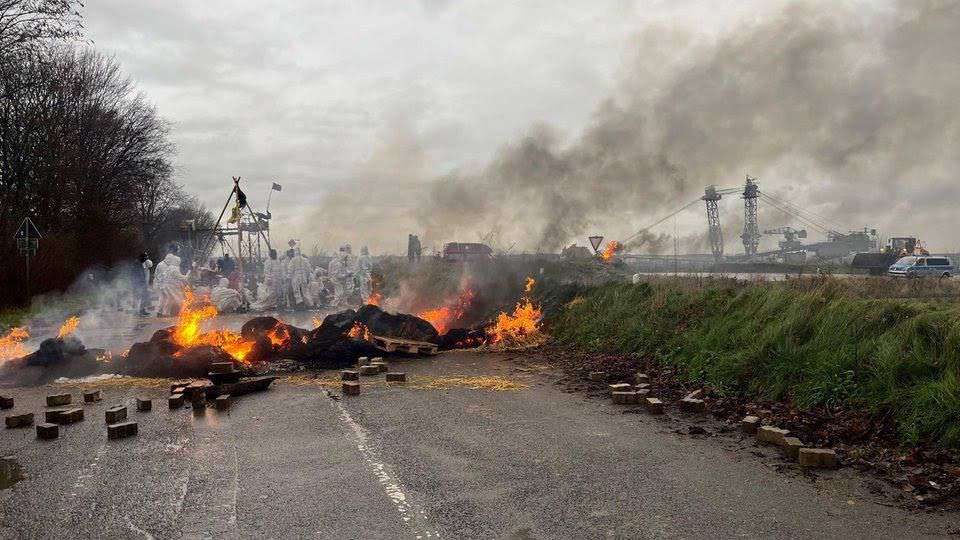 German (and worldwide) activists have fought this before, and are doing it again. RWE, one of the dirtiest energy companies in Europe, is unsurprisingly attempting to expand their lignite mining operations and having to face the fierce opposition of anarchist resistance against the destruction of the earth.

Lützerath is a village in the edge of Garzwailer mine, which digs for lignite coal for energy production. RWE has forcefully kicked out the residents from the village with the intention to demolish the houses and expand the mine, and for over a year activists have squatted the village and built treehouses, blockading the destruction.

The police has announced their eviction plan, which started on the 9th of January, where they want to build a fence around the village, then fence off the different barrios and one by one evict the barrios on behalf of RWE to destroy the village.

The resistance is not afraid of RWE and their police goons and folks have joined forces to resist the eviction and fight back, exactly the same way as it was done in Habacher Forst, where the trees still remain! In the exact same fashion as Hambi, Lützerath is as much an ecological struggle as it is an anarchist alternative to capitalist and democratic society.

They are asking for as much support as possible, so if you can, join the camps and block the cop’s access, fight the eviction and support people on the ground!

If you are unable to join that way, remember that RWE is a multinational company that owns many businesses around the world, and most likely has investments wherever you are from. Those assets are as fair game as RWE itself. They are one of the biggest polluters in Europe, they are very good at marketing themselves as a green eco-conscious company and they are not afraid to fight back, but they have been fended off in the past and they can be destroyed once again. Cut their fingers wherever they are so they cannot grab more money and they will run back afraid of their loses.

You can find more info (and all the socials of the resistance) here:
https://luetzerathlebt.info/en/

Solidarity with all fighting in Lützerath.

For an anarchist future. Fight back!