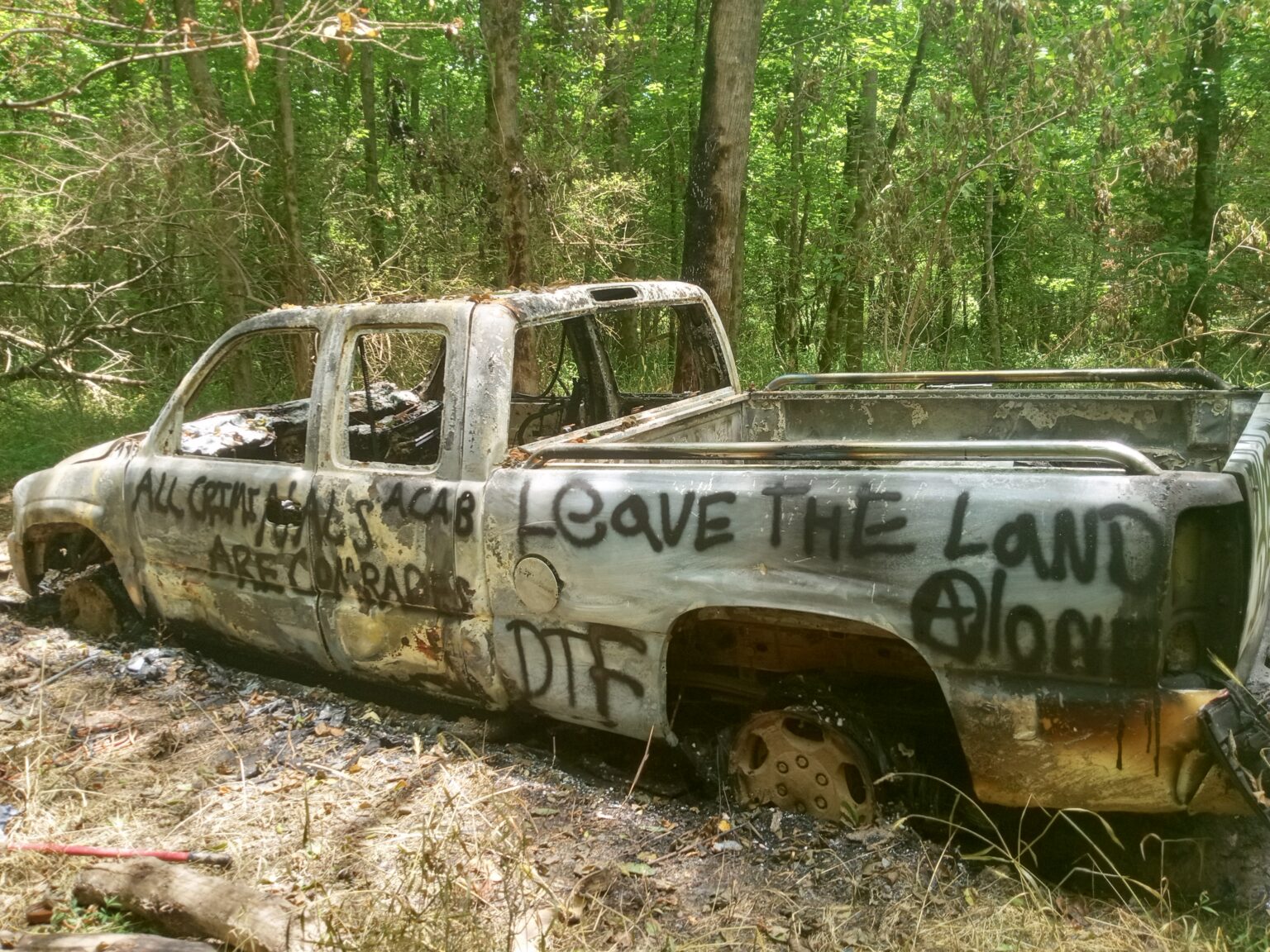 “On the evening of Saturday, November 19, chainsaw-wielding militants took action to close down the Atlanta Police Department’s shooting range inside the Weelaunee Forest, where APD trains weekly to kill and maim the people of Atlanta. A few small trees were selectively felled in order to block the access road to the shooting range. One of the felled trees hit a power line which provides electricity to the shooting range, leading to a power surge which blew a transformer and disabled the cameras, which were then destroyed with fire and hammers. The power line only services the shooting range. No residential areas were impacted by the outage.

In the middle of the range is a yellow school bus. The windows are shattered from bullet holes, and spent munitions –flash grenades and tear gas – lie under the seats. Its purpose on the range is clear: the only ‘protection’ police offer is violence and death.

The decision to cut a living tree should never be taken lightly. The ongoing presence of the shooting range was an affront to the forest and all who live in or near it; the gunfire and explosions at all hours of day and night, the toxic lead ammunition poisoning the soil and leaching into the water, the way Black and brown people living nearby were forced to listen daily to the police training to murder them.

Weighed against these impacts and the Atlanta Police Foundation’s plan to destroy the entire forest, we understand the felling of these few trees as the forest defending itself. At a moment when the USA’s model of militarized policing is being actively exported around the world to facilitate the destruction of the Amazon and others of the last great forests and indigenous strongholds which stand between us and mass extinction, we know that if these trees could talk, they would say “fuck the police” and would happily volunteer to fall and crush them.

Since the closing of the shooting range, the Weelaunee forest has not been quiet – even the cold November woods are full of life and noise – but it has been more peaceful without the police filling it with the sounds of war. We hope that all the residents of the forest and the surrounding neighborhood can relax better in the relative silence, but we must be clear that we didn’t do this for their sake.

We took this action for the dead – for Rayshard Brooks and every person killed by the Atlanta Police, for every murdered revolutionary, for the Muskogee who were forced from this land, for every enslaved person who lived and died on the plantation here, for every prisoner killed by guards at the old prison farm and buried in unmarked graves in the forest. This forest is theirs and we will not allow the police to desecrate it with their presence.

We will not allow the police to bulldoze over the history of their own crimes.

The land remembers. We remember. Cop city will never be built.”