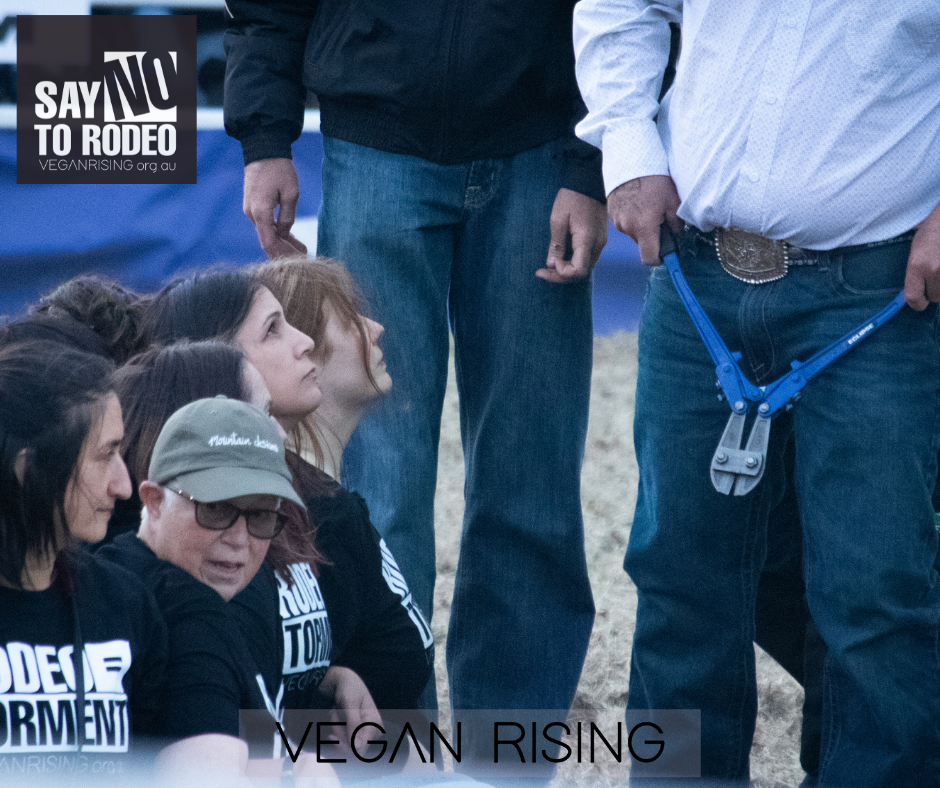 Below there is a reportback from an blockade action at a rodeo in Australia. It originally contained a petition link, which we do not share, but that you can find by searching Vegan Raising.

Ten activists occupied the arena of the Bendigo Pro Rodeo on Saturday night, bringing the brutal display of animal abuse to a crashing halt. After two horses had already been brought bucking desperately in to the ring, ten women stormed the centre of the arena by scaling the gates, locking on to each other with chains and padlocks, and refusing to move. The activists wore “Say No To The Rodeo” T-shirts and released red smoke in to the air as a reminder to onlookers of the blood and violence perpetrated against enslaved and tortured animals.

The activists endured verbal insults and imtimidations by men who enjoy tormenting horses, steers, and bulls for kicks, and by a crowd of 900. Victoria Police stood impotently by and watched as men in turn poured water over the women’s heads, trapped them under a hessian blanket, and used horses hooves to kick dust in their faces.

The activists stood their ground and managed to stop the show for just over an hour before the police cut their chains and took them away. Although the entire show was not cancelled, a powerful message was sent to all attendees that tormenting, terrifying, and harming animals is NEVER okay! Some animals were seen being driven away in horse floats, having been spared their impending torture and humiliation. Many patrons left early.

The rodeo is one of the most blatant forms of animal abuse that exists in this country today. The activists are calling on all state governments to make rodeos illegal. They are also calling on the public to boycott this brutal form of entertainment that supports cruelty and violence towards innocent animals.

This disruption took place on the traditional lands of the Dja Dja Warrung and the Taungurung Peoples of the Kulin Nation, so-called Australia.

Say No To Rodeo”.