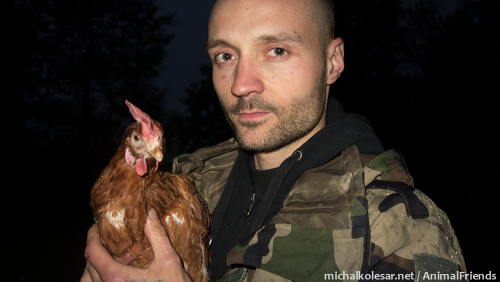 “We lie in a cornfield and wait for the sunset. It is raining. We are wet and muddy. In front of us these is a fence, behind the fence there are several buildings, white and silent. Tens of thousands of birds are in these buildings, most people perceive them only as cackling machines for the production of eggs.
As if birds could not be desperate, feel hope or desire. As if they couldn’t enjoy caress and closeness and happiness. As if only a human being had a meaning and everything else was just for humans need and consumption.

As the guard was checking the areal, the strong light of his flashlight passed over our heads. He walked around the corner and disappeared in the dark. We waited for our patrol in the front to tell us if he is already at the gatehouse. And we can go.

There are three rescue actions in this report with a total of 77 saved animals.
Thanks to those who help us find safe homes for animals and those who care for them.

IN MEMORY OF MIKE HILL

Those were the times when there were fierce battles of hunting saboteurs with hunters in Great Britain. At one Cheshire Beagles meeting, at the end of the day, two of the hunters loaded the hunting dogs into a pickup trailer and prepared to leave. The saboteurs thought they were going hunting to a different place, so three of them jumped on the trailer.

The car was driving at high speed on steep village roads. Saboteurs tried to remain on the trailer and the driver did not slow down. In one turning, one of the saboteurs, Mike Hill, tried to jump out, but got tangled under the wheels of the car. The car continued for about another mile.

They stopped when another of the saboteurs managed to break the rear window of the car. The hunter hit him with a whip. One of the saboteurs ran back to the limp body, the other to a nearby house to call an ambulance. The driver of the car, Allan Summersgill, drove off.