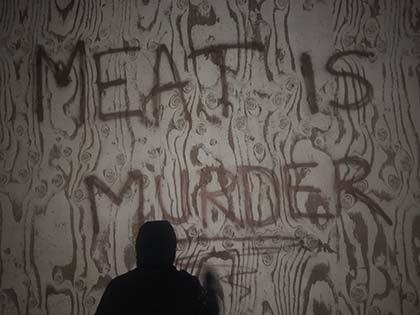 Animal rights Activists beautifully redesigned the exterior of a massive chicken harming facility. We acted in solidarity with the animals and other groups of activists in an attempt to resist the significant repression activists are currently facing under the regime of Jason Kenney (the premier of Alberta).

The recently proposed ‘Bill 1: Critical infrastructure defence act’ criminalizes nearly every form of peaceful protest, directly contradicting the Canadian Charter of Rights and Freedoms. If this Bill passes, activists who engage in peaceful trespassing, blockading, or interference against ‘critical economic infrastructure’ OR aiding anyone who chooses to do so would be liable for up to $10,000 in fines and 6 months in prison even as a first time offender. This Bill also grants ‘peace’ officers the ability to arrest protestors without a warrant. Before even announcing the Bill, it had passed its first reading with a second reading scheduled for the next morning. Bill 1 was a direct response to the Wet’suwet’en solidarity blockades, but it affects us ALL.

Just months prior to its proposal, Jason Kenney introduced a similar Bill which targeted animal rights activists who trespass onto rural property for the purposes of exposing speciesism or aiding animals towards liberation. That Bill passed in 10 days.

We vandalized this place of extreme violence because Jason Kenney told us not to, and because NO ONE is free until ALL are free.