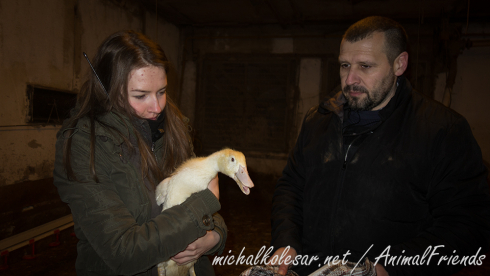 ‘I stop the car in the forest on the side of the road. Several people get out with the necessary equipment and get lost among the trees. Me and Petra are going to park the car. Later we meet with others near the object. When the patrols are on their spots we go to the large metal door. The silence and stink is everywhere.

In a little while we are inside. Every time it looks the same. Life in liquidation proceedings.

Lukas and Petra prepare the bags and I collect animals. They don’t even run away. We take some pictures. No art, just documentation. After that we are ready to leave with six ducks for whom kind people prepared a wonderful new home.

In Memory of Bill “Avalon” Rodgers

Bill Rodgers was found dead on December 21, 2005 in his cell. According to police, he committed suicide using a plastic bag. He choked himself.

Together with six other activists he was arrested on December 7, 2005 as part of Operation Backfire (FBI).

Before he suffocated, he wrote, “I didn’t leave. I just changed form. With or without me, resistance is getting stronger every day.” ‘