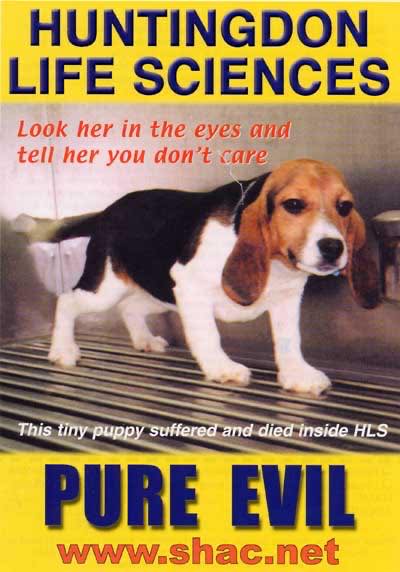 It is with a sense of relief that we greet the online release of the new documentary film, The Animal People, this week. After more than a decade of being dismissed as criminals and extremists, a side to our story is finally going to be told.

Produced by Joaquin Phoenix, the film follows the journey of the SHAC 7: six young activists who find themselves indicted as terrorists by the United States government. The reason for their indictment: the activists’ leadership of a controversial protest campaign aiming to close down one of the largest animal testing laboratories in the world, Huntingdon Life Sciences.

The story about how government and big business colluded to rewrite laws to crackdown on effective activism is an important warning on the lengths that the state will go to in order to protect corporate interests. It is also important because it was not only in the USA that this happened: it happened to activists in the UK too. The signees to this statement have endured years of government repression and draconian prison sentences as a result of our involvement in running the European SHAC campaign, an above-ground grassroots protest group.

As in the USA, the British government took aggressive action against SHAC activists as soon as we began to affect corporate power. Frightened by threats from multi-billion pound pharmaceutical companies that they would pull out of the UK unless the government took action, and unable to pursue underground activists, politicians instead, decided to introduce new legislation to target SHAC. Impressed by how the USA had managed to silence SHAC and spread fear throughout the movement in the USA, the British government decided to replicate the same in the UK, working in collaboration with the FBI. We would soon find ourselves being labelled as terrorists and extremists in the Houses of Parliament and in the press for our protest tactics and support of non-violent direct action. A secret two year £3.5 million police operation was tasked with targeting SHAC and our campaign was infiltrated by undercover police officers. A corporate spy would also go on to admit to spending years inside SHAC, working on behalf of the vivisection industry and collaborating with the police, assigned with sabotaging our campaign.

On 1 May 2007, aiming to decapitate the SHAC campaign, over 700 police officers raided 32 addresses, arresting 30 activists and seizing our campaign banners, posters, megaphones, flyers, computers, cameras and funds. The supposed “leaders” of the campaign (many of us only teenagers) found ourselves being charged with Conspiracy to Blackmail. Despite always including a legal disclaimer as well as paying a top barrister to read through our website and newsletter communications, the prosecution alleged that since its beginning, our protest campaign had in fact been blackmailing companies to drop Huntingdon Life Sciences.

We found ourselves demonised in the press, photos of threatening letters and hoax bombs plastered across pages with the allegation that we were somehow responsible for them. In fact, the prosecution did not and could not allege any of us had sent them: after all, we hadn’t. Rather, the CPS blamed us for the actions of other unknown individuals who had sent them. They claimed it was our fault because we had exposed and published the company details and encouraged people to contact the companies and urge them to sever their ties to the laboratory. Such an extraordinary leap in logic was lost on the media who concluded that we must have sent them.

Because of the political will to see our campaign end, we have all endured years of repression, trauma, untrue allegations being made about us and excessive prison sentences. We have been treated worse than any other criminals in the prison system: denied day release, outside work schemes or tagging and been subjected to punitive and absurd licence conditions upon our releases. The police claim of not targeting lawful activists when they targeted SHAC is hard to believe when they also demanded we receive Anti-Social Behaviour Orders preventing us from peacefully campaigning in any way against Huntingdon Life Sciences (with the threat of a further five year prison sentence if we do so). Unable to continue under all the repression, police harassment and seizures, the SHAC campaign itself was forced to end in 2014 after every single activist who tried to run it found themselves also being arrested and prosecuted.

Whatever consequences we faced for our actions, the brutal reality is that as a result of the repression we faced, the animals who we did it all for are still locked up, suffering and dying inside Huntingdon Life Sciences (now rebranded as Envigo and part of Covance). Many of the SHAC defendants have been designated as core-participants in the Undercover Policing Inquiry currently taking place. The inquiry will look at whether we were victims of a miscarriage of justice because the CPS never disclosed the undercover police operations to our defence. We are pleased that our convictions are finally being looked at but it is with heavy hearts as we remember all the animals who have died in the meantime. We look forward to the whole truth coming out about how politicians and big business conspired to crush our campaign and deny us a fair trial. Until then, we look forward to people making up their own minds after watching The Animal People.