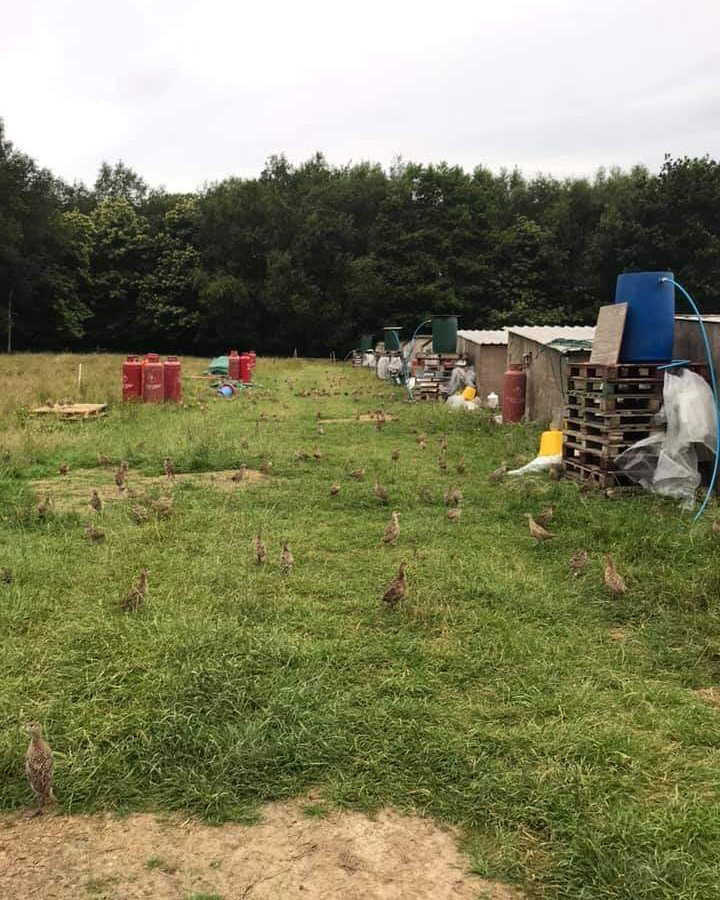 Since the 15th of March, about 45,000 game birds have been released from breeding farms in the UK.

The shooting industry in the UK is responsible for the strategic release of 43 million game birds every year. 60% of those birds are bred in the UK whilst 40% are imported from game farms outside of the country, be it as hatching eggs or as live chicks.

The pheasant and partridge are bred in factory farm conditions. They will keep breeding birds all year round, take their eggs and hatch them in incubators. Then the breeding farms will sell chicks aged from a day old to 6/8 week old juveniles to shooting estates, who will keep them in outdoor pens until they are ready to be released in strategic locations. Then gamekeepers will place feeders and water in specific places, getting the birds used to living exactly where they need them to be and ready for the shoot days.

During a shoot, beaters (a group of people making noise and walking in a straight line across places where the game birds live) will push those birds out and up in the air, making them fly, so people who pay a fuck load of money can shoot them out the sky. Its the ultimate betrayal, caring for them for months to push them into their death.

After a game farm map was released earlier this year, autonomous groups have been busy. Folks have approached game farms and released as many birds as they could. It is true that those birds still run the risk of being shot, but we must remember that game farms are not shooting estates, even though some of them might be within the estate itself. That means that their targeted and strategic release of birds is massively fucked with, and that gamekeepers lose a huge amount of money.

Because those birds are not used to living in the wild, many of them might fall victim of foxes and birds of prey. This is not different to gamekeepers releasing them in the shooting estate, but it does mean that the shooting industry loses a lot of money. And we must understand the industry as what it is, a capitalist enterprise. Their whole year revolves around breeding those birds and managing the land so they can make money during the shooting season. If they lose the birds, their year is over before the season starts.

Out of multiple reports that people have sent we can gather some useful information. Plastic netting tends to be used as either a roof or as roof and walls. It is easily cut with scissors or Stanley knifes, but needs to be rolled up and taken out of the way of the birds so they manage to run or fly away without getting entangled. Chicken wire is also used on the panels and can be cut with tin snips. Bolt cutters are an overkill for that kind of action.

Electric fences are out around the farm and are easy to disconnect by locating the battery. That metal wire can then be cut so it cannot be used again. Many breeding sheds might have heat lamps powered with gas bottles that can be disconnected and stolen. Gas plastic pipes can be cut off afterwards, gas regulators can be broken, and the lamps themselves can be either broken or stolen.

Once netting or wire has been cut making a big enough hole for the birds to escape, folks have been herding them out by creating a line and walking them towards that hole. In some reports, sheds have also be broken as much as possible to provide extra escape routes for those birds who didn’t get herded out of the pen during the action.

There is no more than a month left for folks to do these kinds of actions before birds are moved into estate pens before the shooting season starts. Anyone that decides to take action could use the game farm map to find locations.

There have been reports of this kind of action in other countries, like a pheasant breeding farm in Sweden last week, and we should mention that there are huge breeders in France and Portugal producing game birds in battery cages to then be transported for shooting in the UK. You can find more information about this in the Hunt Saboteurs Association website. Portugal alone exports 20 million game birds reared in battery cages.

Don’t get this confused with a single issue campaign. The shooting industry is responsible for many forms of oppression at once, not just for the death of millions of birds. The land management means wild populations are murdered with traps to eliminate possible predators and forests and hedges are manicured to the like of rich dickheads that want to shoot birds. The destruction of uncountable numbers of species both plant and animal is obvious as soon as anyone sets foot on a shooting estate. The upkeeping of the class system is also a big part of the shooting industry, with an interesting relationship between the working class “servants” and the upper class “customers”. Lastly, this is a land rights issue. No one is welcome in shooting estates, regardless of public footpaths. No one is able to grow a few vegetables or build a little shack in the countryside partly because of the mass amount of land owned by game estates.

It is also important to mention that a pheasant will lay 28 eggs from March to July. 20 of those eggs will make their way into birds that will be shot dead. For that reason, the earlier in the year, the more impact the action will have. If targeting breeding farms outside of the breeding season, folks recommend to not do so over winter and to wait until February/March time to ensure game farms do not have the possibility to restock before the breeding season starts. Doing quick numbers, 10.000 released birds in March could mean up to 200k birds saved from being shot dead. Impressive, right?

Don’t let this opportunity pass. Get yourself a mask, spend a couple of nights in the countryside, and smash the shooting industry to the ground.