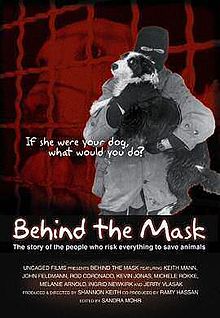 Behind the Mask: The Story of the People Who Risk Everything to Save Animals is a 2006 documentary film about the Animal Liberation Front (ALF).

It took three years of filming, interviewing, and editing to complete. The movie was created by animal-rights lawyer Shannon Keith, who owns Uncaged Films and ARME (Animal Rescue, Media & Education).

The documentary was produced in response to a perceived bias in the mainstream media against the animal rights movement.