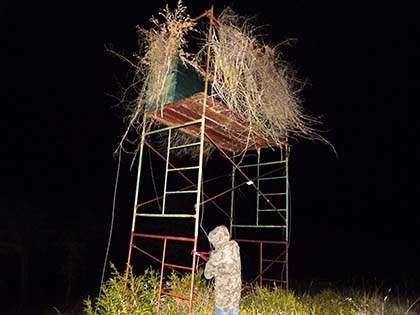 “Hunting only means murdering innocent beings. Hunters aren’t a collective that “loves” animals, they are heartless sadists that have fun murdering them.

The ALF claims this anti hunt action that has destroyed five hunting seats, a tower and a hunting lodge during the night of the 4th of January in Aranguren (Navarra).

We will keep fighting hunting by any means necessary and we will not stop until they cease pouring blood. This is a war where the political sphere allows them to keep committing murder.

Their reasoning behind is that they are helping “regulate” species (if that was the case there wouldn’t be hundreds of farms that breed animals for hunting). They call themselves animal lovers when they use their strength and bore to end the life of animals that do not want to die, they call themselves ecologists… stop crying and victimising yourselves, you’re the ones using weapons. If you enjoy hunting that much hunt each other, that would be a fair fight.

For animal, earth and human liberation and for the eradication of this kind of psychopaths and of everybody that allows the murder of millions of animals.

We are a pack, we are radical and we are growing!

A call to all who are against the exploitation of animals, get together, do all kinds of direct action against those who allow the bloodbath but also remember to be mindful of your security.