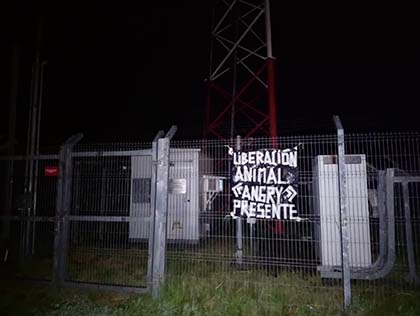 “As was already announced, the first coordinated statement from the ALF/ELF in Temuco, $hile. December 11, 2018, exactly 5 years since the death of Sebastián Oversluij in combat. This coordination is a minimal tribute to his memory.

On the night of December 11 our hearts and minds turned to another anniversary of the death in combat of our comrade ‘Angry’ as he was preparing to carry out a bank expropriation in the outskirts of Santiago. We still have the images of that morning recorded in our minds as well as the strange circumstances in which the assault itself took place.

We will not forget, but we do not want to just remember, we want to leave our mark wherever we go. And on this 11th we started a new journey.

We claim this propaganda and these actions in memory of compañero Sebastián Oversluij: Posters glued at rural bus stops. We hung a banner which read ‘ANIMAL LIBERATION “ANGRY” IS HERE’ in a base transceiver station (BTS) that destroys biodiversity. We tore signs for a Club de Huasos that was preparing to hold a shitty ‘juegos criollos’ day. We destroyed pine trees which cause droughts in the habitat where we were, thanks to a forestry company in the area. Finally we claim the theft of wood that was carried out some time ago which we will use for individualistic purposes.

It is necessary to express how difficult it is for us to try to make changes to the way that people see Animal Liberation. The radical problem is that in this region (as in others in the south) it is common to steal animals for commercial purposes, and kill them to eat, and mistreating others is their daily bread. People follow the logic that ‘if an animal is not useful, what is it for?’ The animals are killed without any kind of remorse; the life of cows, lambs, horses, cats and dogs, among others, end as if they were nothing.

We are anarchists and vegans, but with respect to the last thing we are not interested in only a change in eating, we want to go for more. Although it is difficult, as we said before, our propaganda will reach people and communities, and the actions of harassment will cause –at least– terror to the executioners and exploiters of animals. It is the least we can do for those who live a daily life of death.

In the memory of the Anarchist Warrior/Expropriator/ Vegan Sebastián Oversluij, we will continue contributing and advancing in spite of what it will cost us because although the road is uphill, we are always thinking about our brave compañero Angry.

We send greetings to the Liberating Warrior/Expropriator/ Vegan Marcelo Villarroel who is serving his sentence in the High Security Prison in Santiago, the words he regularly shares fuel the fire that we carry within us.

For the spread of ALF/ELF cells!
For memory as a weapon!
Sebastián Oversluij, present!
Prisoners of the Social War, to the street!