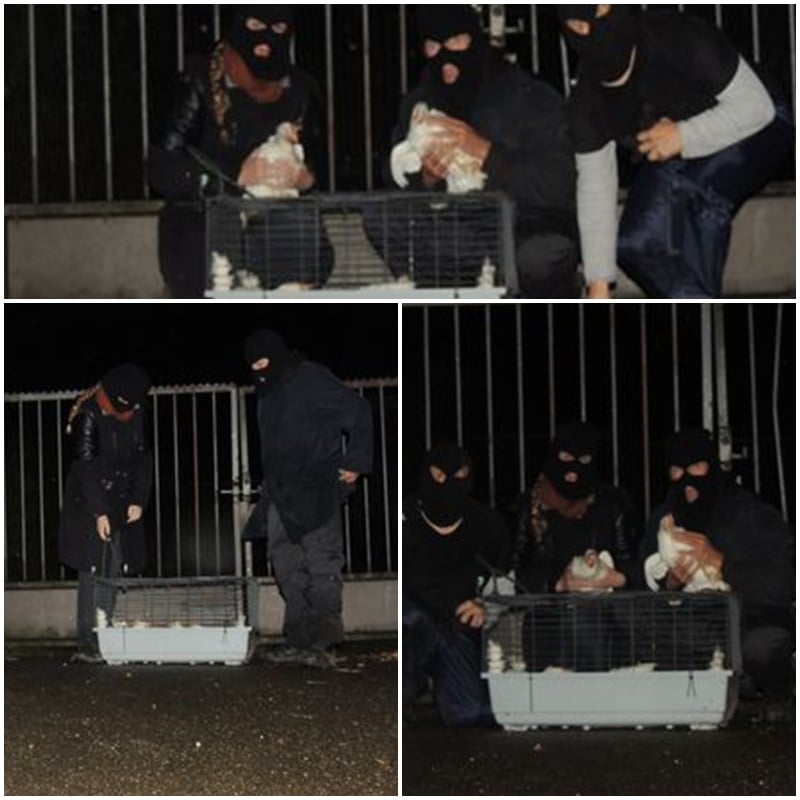 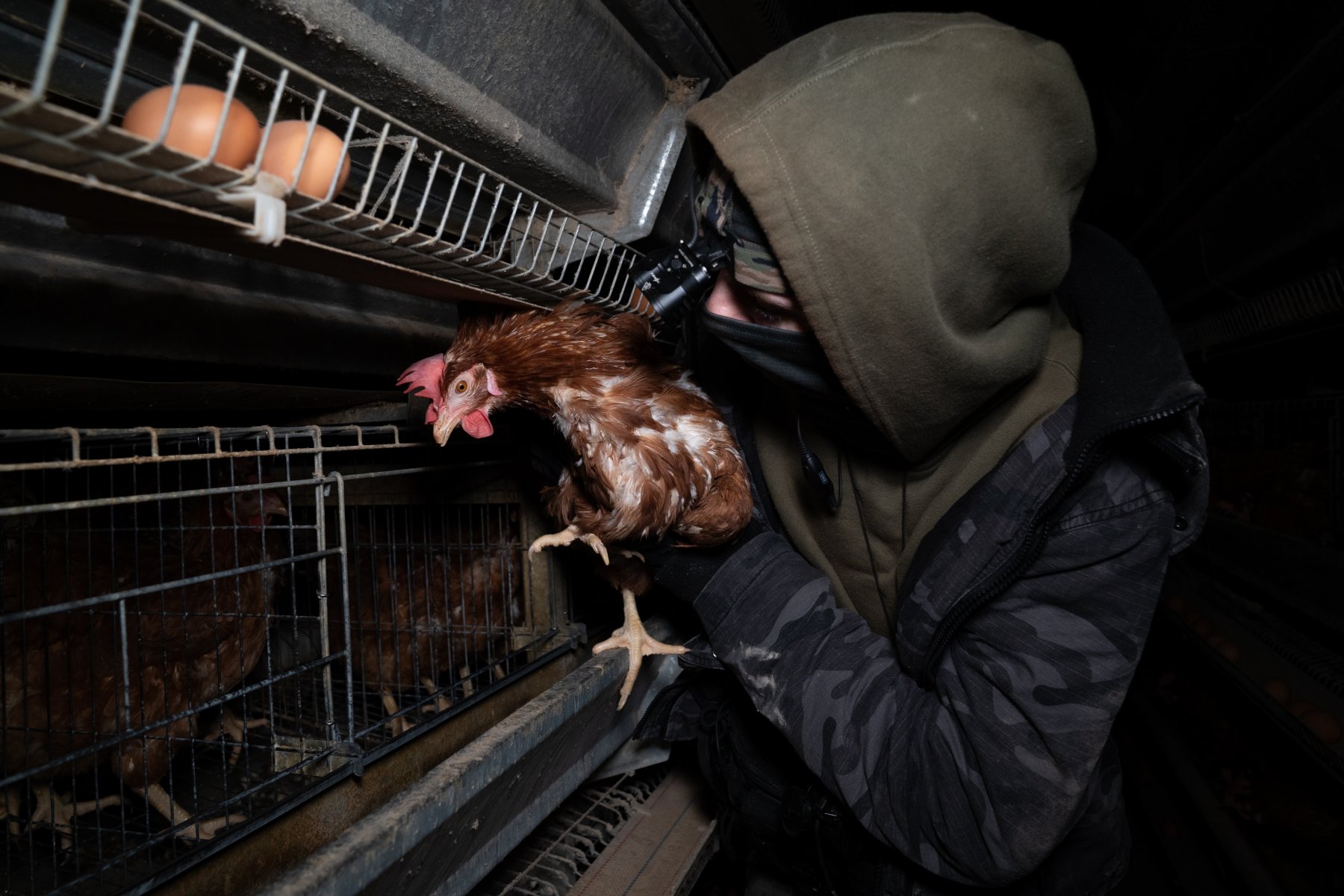 “We thought it was only fair to share the freedom around….Melbourne is out of lockdown and now 16 hens are too. 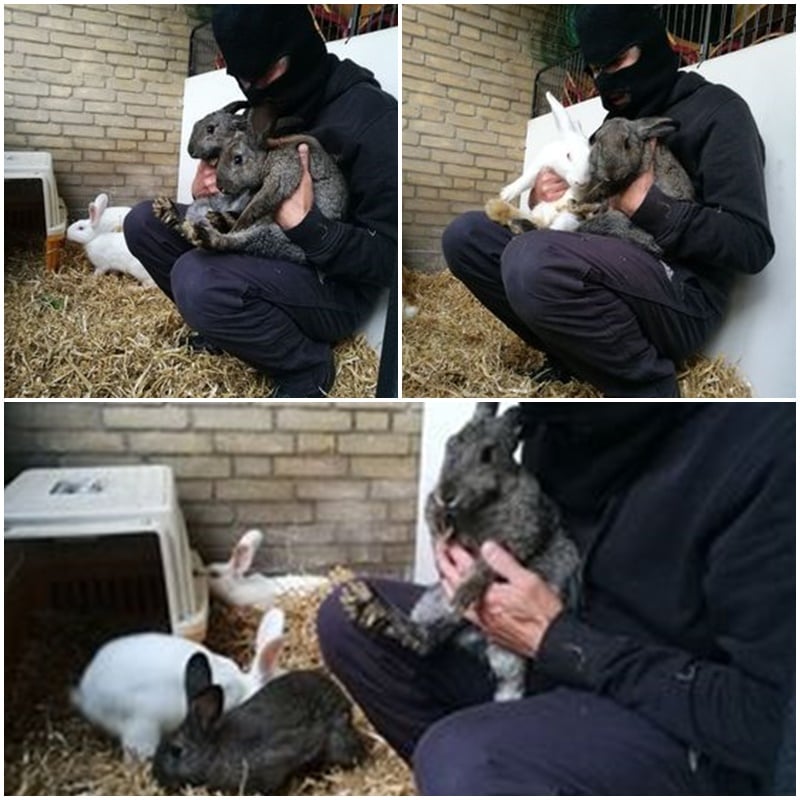 “Belgium. Love Is Liberation The A.L.F. Save 14 Rabbits from an intensive rabbit meat farm..” 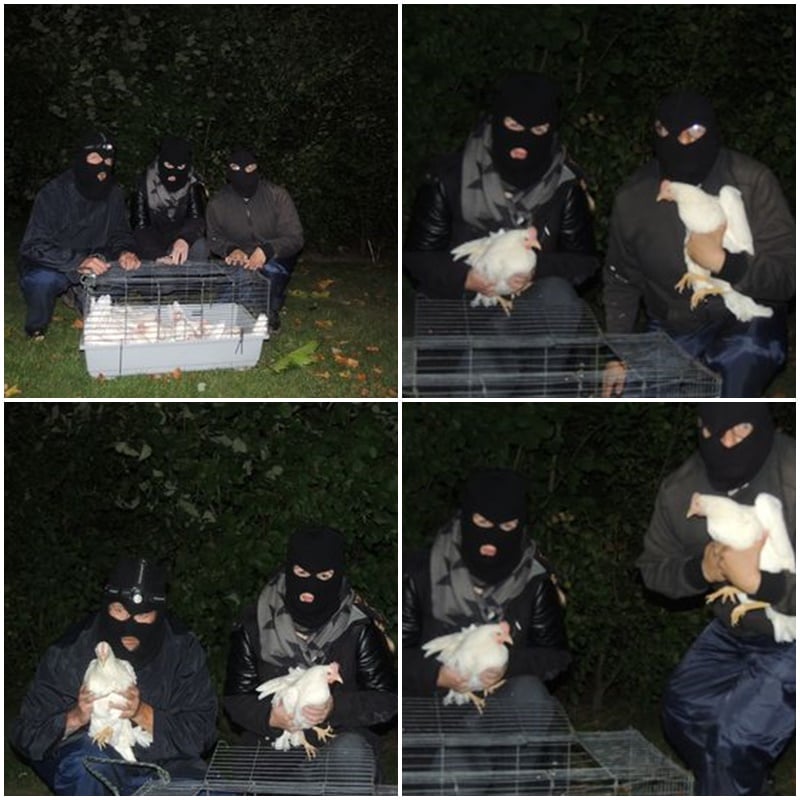 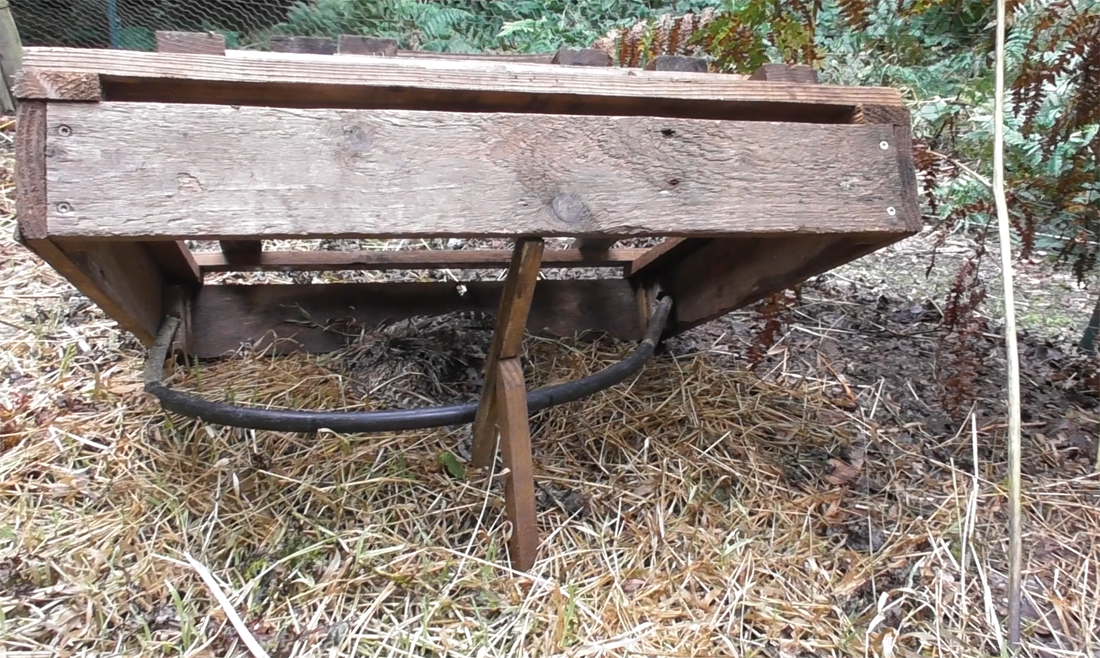 All game keepers are scum bags, the “game” shooting industry is trash and the way it decimates the wild and the environment all over the country is disgusting and needs to stop. When we found out these pieces of shit in Shropshire were trapping and killing birds of prey we had to act. We took a trip to the shooting estate near Chelmarsh and found the whole place covered in traps – larsens, fenn traps and bird of prey traps – which we destroyed.

The pheasant pens became another target for our rage and we completely dismantled them. We raided their sheds and stole disgusting family photographs of the murderers, proudly displaying their past trophies, their guns and dead birds, smiley happy family days out killing.

There were three partridge release pens, still full of birds waiting to be shot. We returned in the night and released over 100 captive birds from those pens, then smashed the fuck out of them. Those partridges will now be free and not just a flying target for sick murdering fucks to shoot.

With this action we send a clear message to this game keeper and game keepers all over – you fuck with birds of prey, we fuck with you. Fuck with the wild and expect retribution.

This action is dedicated to Waka, murdered by Daesh three years ago. We continue the fight for liberation in your name.”

To read about the expose on the shoot and their birds of prey, head to the HSA website: 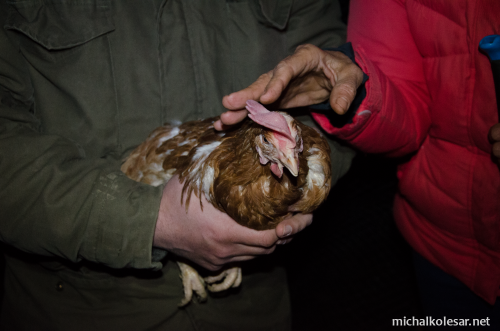 “During several nights, we took a total of 239 hens from cages and aviaries.

What can I say when it’s still the same and still the same? When the dust, the stench, the halls full of feathers, the screams of stolen lonely lives are not lost anywhere? That sometimes it hurts a lot and sometimes even more? That it’s a kind of instinctual sadness? That one of the few moments when it’s better inside is the moment we leave the hall and a couple of hen girls with us? Time to smile that at least someone, at least a few lives, we took from that desperate industrial misery and out of unkind human hands.

I feel sorry for those who are staying behind in those halls, and more and more of myself stays there with them.

We thank everyone who provides safe homes, everyone who helps us find them and everyone who supports us, for example by a good word or by sending a message about rescued animals. This story is yours too.” 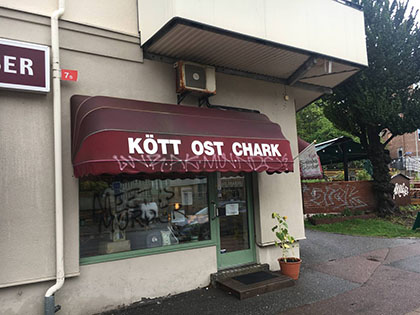 A meat and cheese shop in Gothenburg, Sweden was spray painted with “meat is murder”. 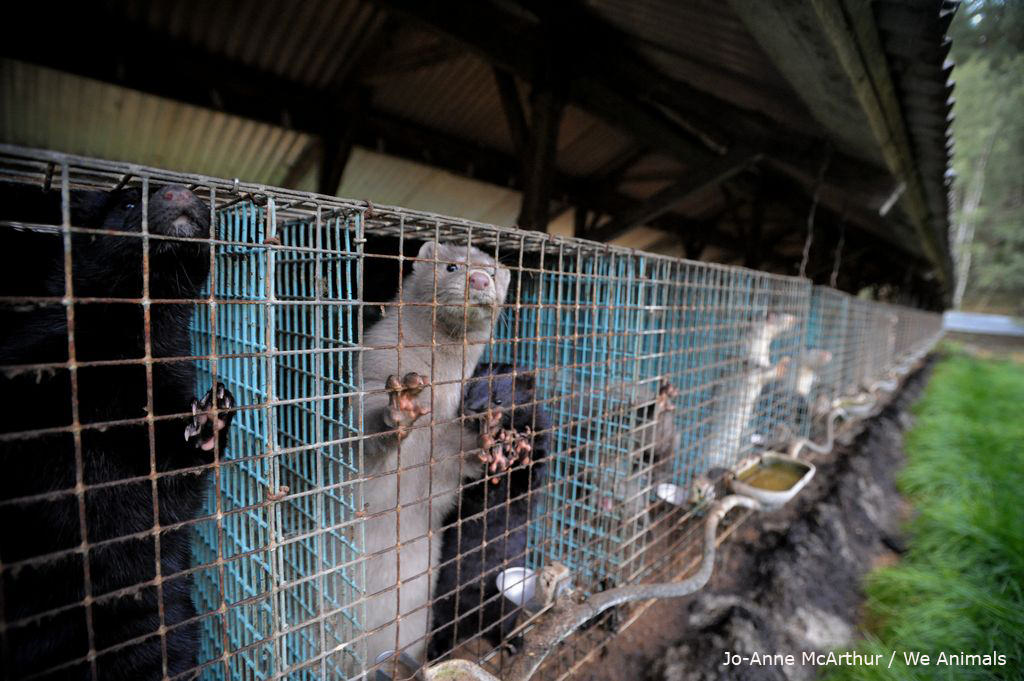 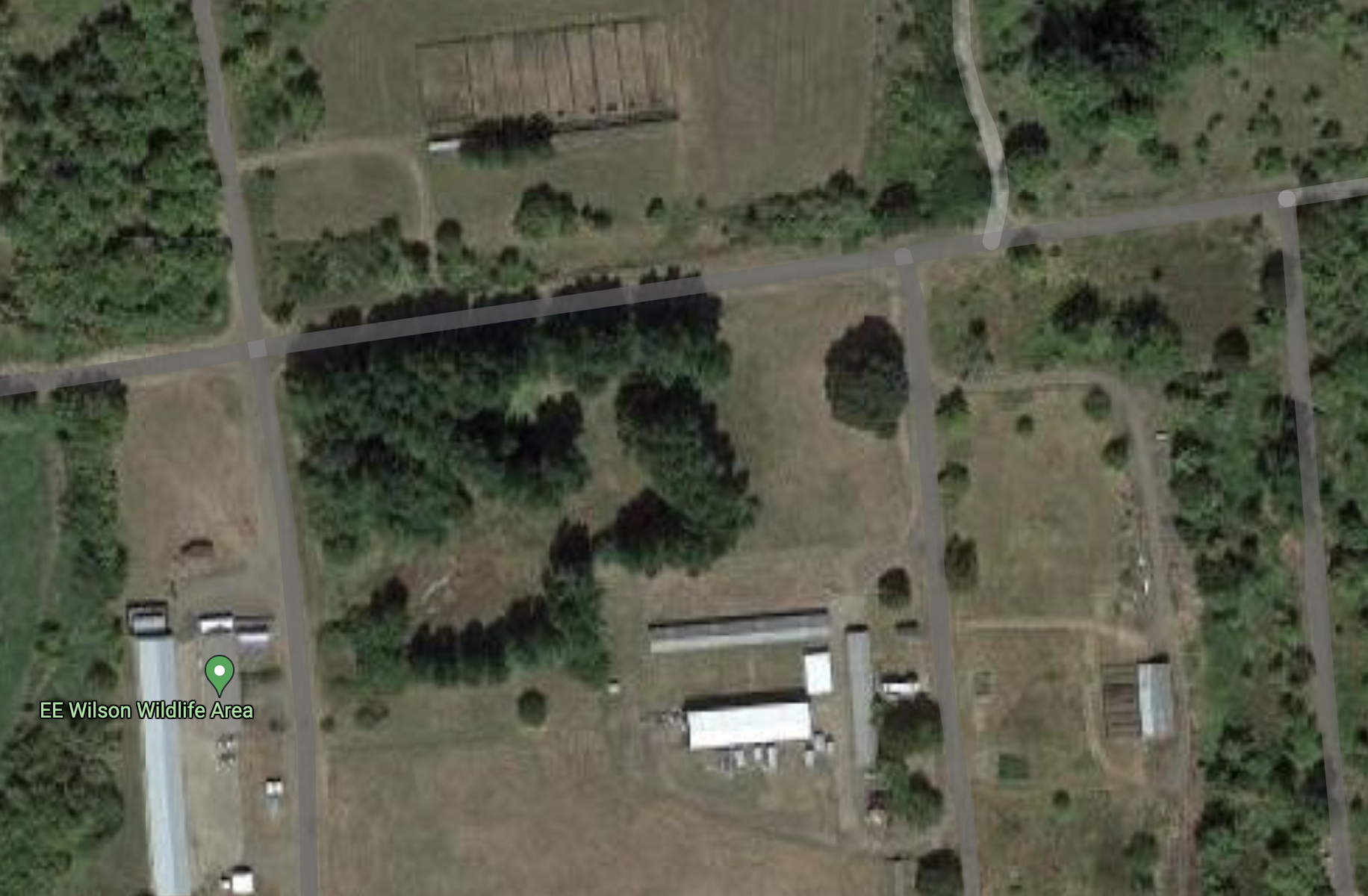 “On 09/18/2021, ten pheasants and quail were freed from captivity at the E.E. Wilson Wildlife Area in Oregon.

Fencing was cut at the sides and the top edges of the enclosures, then we stepped in and guided the birds toward the holes and watched them fly away into the night. A few birds hid in the grasses and we were unable to help them exit, but we left places cut in the fencing where they could escape.

In solidarity with all those who use direct action to fight oppression. For the wild!

“It was a cold shitty night in the South East, we were bored, so for shits and giggles decided to take an impromptu visit to our local dairy cow abusing farm.

After a quick look round and finding some interesting stuff, we got to work. In less than 20 minutes, we’d cut all the milking tubes, empty 2 tanks of bovine breast milk all over their floor, smashed up their calving pattern, took their laptop and relevant paperwork and left them a message telling them to stop fucking with our friends. All in all it was a good night, animal abusing scum need to be told and should pay for what they do……financially, we think, is the best way.

This action is dedicated to the memory of our comrade Waka, whose selfless actions sadly cost him his life. Rest in power friend.